The Properties of Snow 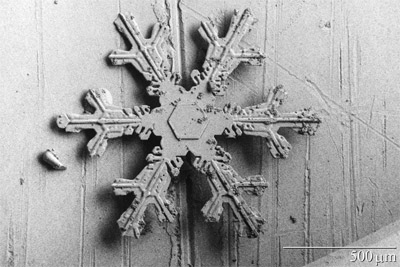 To understand how avalanches form, you need to understand the properties of snow crystals. Depending on the temperature, humidity and other atmospheric conditions, snow crystals can have a variety of shapes, but all are generally hexagonal or six-pointed.

In areas that get a lot of snow, the snow on the ground forms a snowpack. The layers within the snowpack have different qualities due to the shapes of the crystals in the layer. For example, six-pointed crystals can interlock more easily than needle-shaped crystals, so they create a steadier layer. On the other hand, when super-cooled water comes into contact with snow crystals in the air, it creates rime. Heavy rime deposits can cause pellet-like snow called graupel, which creates a very unstable layer.

Snowpack layers also have different qualities because of changes that take place once the snow is on the ground. Changes in the weather lead to changes on the snowpack's surface.

In snowpacks with a high temperature gradient -- a large difference in temperature -- crystals tend to develop facets. The flat surface of a facet cannot bond well to other surfaces. Heavily faceted crystals located deep in the snowpack are called depth hoar and create dangerous instability.

On the other hand, low temperature gradients and consistent sub-freezing temperatures cause rounding, which allows crystals to compress more tightly. The exchange of water vapor during rounding also creates bridges between crystals and parts of crystals, creating a firm, stable snowpack.

Regardless of whether they are the result of temperature gradients, atmospheric conditions during snowfall or melting and refreezing, strong and weak layers of snow make avalanches possible. Next, we'll look at how avalanches form and what can trigger them.

Avalanches in Other Materials

In the right conditions, avalanches can form in materials other than snow, including volcanic debris, mud and Martian sand. Usually, the volume or weight of the material overcomes the friction holding it in place. Rain or melting snow can also reduce the amount of friction, leading to mudslides and rockslides.