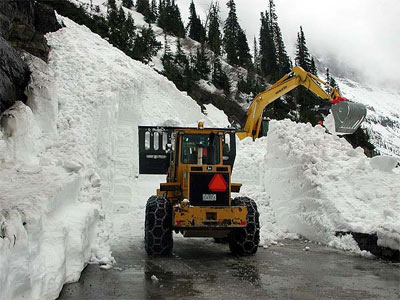 Avalanche fatalities are most common in the winter months, but since early-season snowfalls and spring thaws are also dangerous, they can occur in every month of the year. In addition to the threat to human life, avalanches can cause tremendous damage to buildings and property. They can also close roads, cover train tracks and disrupt local economies. So, ski patrols and other organizations usually take steps to prevent major avalanches.

One technique is to deliberately trigger small, controlled avalanches when no one is on the slope. Staff and researchers first study the snowpack either by digging pits and analyzing each layer or by using radar technology. They then start an avalanche with explosives or artillery fire. On small test slopes, they may also perform ski checking by deliberately skiing along fracture lines high on the slope. People performing ski checking always work with at least one partner, who remains in a safe location in the event that the skier gets caught in the avalanche.

Other techniques involve preventing the conditions that lead to avalanches or interrupting the flow of snow. In some locations, fences, posts, nets, anchors and windbreaks change the way snow collects, reduce the size of the slab or provide physical obstacles in the event of an avalanche. Authorities in parts of the United States and Canada have also reforested areas that underwent heavy logging (clear-cutting in avalanche-prone areas is illegal in most of Europe).

But avalanches can happen in spite of all preventive measures, especially in the first 24 hours after fast, heavy snowfall. Next, we'll look at how people can avoid triggering avalanches.

Even if you've never wanted to be a park ranger or a ski patroller, launching artillery to start an avalanche might sound like fun to you. You can play an avalanche control game at ParkWardens.com.