Can you really outrun a fire? 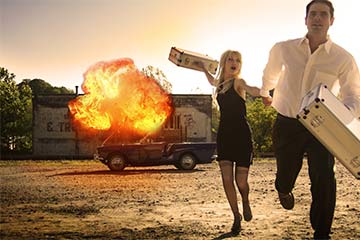 Running away from a fire is not as simple as it looks in the movies.
Keith Wright/Getty Images

Although it may look easy in the movies, trying to outrun a fire can quickly turn into a hopeless situation. It seems like it should be possible, given the faster relative speed of humans to most fires, but there are so many other factors to consider than straight speed. If you're close enough to a wildfire that you have to move away from it quickly, chances are that the combination of smoke, heat, panic and the fire's inherent unpredictability could become deadly.

Even if you're in great shape and happen to be a marathon runner, there's no way you'll be running at top speed in pretty much any fire situation. You'll most likely be navigating uneven terrain, rocks, trees or plants in your effort to escape the fire and that will slow you down considerably. Experts suggest staying on a path or road if you have to run, but that's obviously easier said than done – especially if smoke becomes a factor, and it will.

Even if the landscape is somewhat familiar, and you're able to find a relatively smooth route, you'll soon be completely disoriented by the smoke and quickly lose all sense of direction. And if the smoke doesn't get you, the heat will. In a fire many more people die from smoke inhalation and dehydration than from burns.

Fires are extremely unpredictable. Again, you wouldn't be running in a vacuum, away from a fire that's moving straight ahead, unaffected by winds or weather conditions. You might be able to tell in which general direction the fire is moving, but that might not be the case for long. Even the slightest wind shift could cause the fire to suddenly move faster or in a different direction.

If you find yourself in a situation where you have to run from a fire, there are a few things you can do to help yourself out. If you can figure out which way the fire's moving and see the flanks, or the sides, of the blaze, move to the closest side of the fire (as opposed to in front of it). If it's an area that's already been burned, all the better. If that's not possible, look for a spot with little to no vegetation — find some rocks, gravel or a dirt road. Move downhill if you can; fires actually move uphill faster than down because winds tend to flow uphill, and it can more easily feed itself with the smoke and heat rising above it.

Even the most highly trained firefighters are sitting ducks if a fire suddenly speeds up, changes course or acts otherwise erratically. The Yarnell Hill, Arizona, wildfire in June 2013 killed 19 members of the Granite Mountain Hotshots. The fire, aided by the 50 mph (80 kph) down-drafting winds of an approaching thunderstorm, raced 100 yards in 19 seconds (10.7 mph or 17.2 kph) when it turned into a box canyon and trapped the firefighters there [source: Dougherty].

We hope you never have to use the advice in this article! Sadly, much of it could turn out to be useless during a real wildfire – there's just no telling what a fire will do or if you'll be able to escape it.

10 Pieces of Disaster Safety Advice You Should Ignore
New Jersey's Pinelands Are Ripe for an Australia-type Wildfire
200 Years Ago, We Had a Year Without a Summer