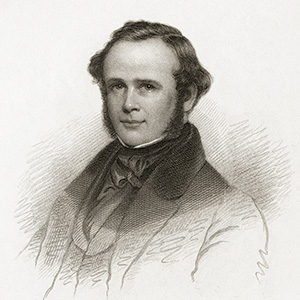 Horace Wells was the first person to use nitrous oxide in dentistry.
© Corbis

Horace Wells was a prominent dentist in Hartford, Connecticut, in the 1830s. Like many dentists of his day, Wells was deeply troubled by the agonizing pain his patients suffered during routine procedures like pulling diseased or rotten teeth without anesthesia — ouch!

In 1844, Wells attended a demonstration — part scientific presentation, part sideshow spectacle — by showman Gardner Colton on the mysterious power of nitrous oxide [source: Gifford]. Colton had briefly attended medical school where he and his classmates experimented with the exhilarating properties of the colorless, odorless gas [source: Encyclopaedia Britannica].

During Colton's show, he administered nitrous oxide to audience volunteers who would burst into fits of giggling befitting a substance commonly known as "laughing gas." At the Hartford show attended by Wells, a delirious volunteer injured his leg on stage, but when Wells quizzed the man about it, he couldn't remember any pain [source: Gifford].

Back at his office the next day, Wells climbed into his own operating chair and asked a colleague, with the help of Colton, to administer nitrous oxide while pulling one of Wells' own troubled teeth. The tooth was yanked and Wells reported feeling not "so much as the prick of a pin" [source: Gifford]. The three men, it seemed, had invented painless dentistry.

Wells was thrilled, and after some training from Colton, went on to perform dozens of similar procedures, each with pain-free results. Believing he had discovered a miracle anesthesia, Wells scheduled a public demonstration of his nitrous oxide technique in 1845 for a crowd of Harvard professors and medical students in Boston.

The big show didn't go so great. In fact, it was a full-on disaster complete with its own name, the "humbug affair." Apparently, Wells' patient, after being administered the nitrous oxide, cried out when Wells began to extract his tooth. Whether it was a moan of delirium, a joke or real pain, the crowd of medical students taunted Wells with jeers of "Humbug!" and "Swindler!" [source: Gifford].

As we know today, Wells was no swindler. The Hartford dentist never recovered from his failed demonstration — he sank into an irrecoverable depression aided by ether and chloroform — but his discovery of nitrous oxide as a powerful anesthetic was recognized by the American Dental Association in 1864 [source: Gifford]. Sadly, Wells had taken his own life decades earlier.

The story of nitrous oxide is long and complex, and its dual personality — miracle pain reliever and dangerous recreational drug — makes it just as controversial today as it was in the 1840s.