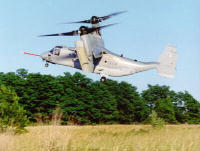 It has long been a dream of aircraft designers to create an airplane that not only can fly long ranges at high speeds and carry heavy cargo, but can also take off, hover and land like a helicopter. Such a plane would have the flexibility to handle many different types of military missions and would also have civilian and commercial uses.

The V-22 Osprey is such a vehicle. This versatile craft has been developed for the military by Bell-Boeing aircraft. Through the use of a tilt rotor, the Osprey can take off and land like a helicopter, but convert to a turboprop airplane while in flight. The aircraft's rotors can fold, and the wings can rotate so it can be stored on an aircraft carrier.

How does this unique aircraft work? In this article, we will take you inside this aircraft to examine its systems and design.