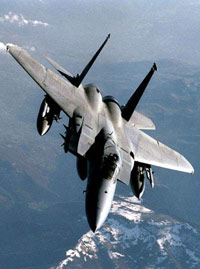 It didn't take long for the world to figure out the combat potential of airplanes. In 1911, only eight years after the Wright brothers got their creation off the ground, the U.S. military started dropping test bombs from above. A few years later, World War I troops were battling it out in the sky with machine-gun-packing fighter planes.

Things moved pretty quickly from there. Only 60 years later, the early single-engine propeller planes had evolved into sleek, powerful fighter jets that could make sharp aerial turns at more than 600 miles per hour (970 kph).

­In this article, we'll look at one of the most famous fighters, the F-15. This remarkable aircraft is getting up in years -- it has been around since the early '70s -- but it's still a crucial piece of the U.S. arsenal. According to the U.S. Air Force, it has a perfect combat record, with over 100 victories and zero defeats. As we'll see, its success is due to its phenomenal maneuverability, advanced electronic equipment and fearsome firepower.

The F-15 Eagle is a small, highly maneuverable jet plane designed to fly combat missions in all weather conditions. Its primary mission is maintaining air superiority. In other words, its ultimate purpose is to defeat other planes in aerial combat.

The United States Air Force commissioned the plane after they got a look at the MiG-25, a powerful fighter jet the Soviet Union unveiled in 1967. The MiG-25, commonly known as "the Foxbat," was far superior to the primary U.S. fighter jet at the time, the F-4 Phantom, and in the heart of the Cold War, the Air Force needed a comparable aircraft as soon as possible. McDonnell Douglas (now merged with Boeing) won the contract for the new project and delivered the finished F-15 a few years later. The company has introduced several variations on this plane since then, as technology and needs have changed (see below). The current combat F-15 Eagle is the F-15C.

The original F-15 Eagle was designed to handle only air-to-air targets (other planes). It wasn't built to bomb targets on the ground because the Air Force knew that the extra equipment would compromise the plane's aerial combat abilities. But when the Air Force needed a fighter bomber to replace the aging F-111 until the new stealth F-117 was ready, they decided to modify the F-15 for air-to-ground missions. The result was the F-15 Strike Eagle, designated F-15E.

The Strike Eagle is not a replacement for the original F-15, but a supplementary bomber plane. Surprisingly, the Air Force's temporary solution turned out to be one of the best fighter bombers ever made. In Operation Desert Storm, the Strike Eagle proved it could successfully fight its way past enemy planes, hit several ground targets, and then fight its way out of enemy territory.

In the next section, we'll see how these two planes are put together and find out how they dive, climb and dodge so gracefully.

An F-15 has most of the elements you'll find on an ordinary jet plane. It has two wings that generate lift, it has rear vertical and horizontal stabilizers and rudders that balance and steer the plane, and it has twin turbofan jet engines at the rear of the plane that generate thrust.

The main difference between an F-15 and an ordinary jet is how these elements are balanced. The F-15's twin engines (Pratt & Whitney F-100-PW-220s or 229s) have a very high thrust-to-weight ratio, meaning they are relatively light for the amount of thrust they generate (they can generate almost eight times their own weight in thrust).

The plane body is relatively light, too, though it is extremely strong. The wing spars (the support structures inside the wings) are made of titanium, which is lighter and stronger than steel, and most of the skin is made of lightweight aluminum. According to the Air Force, each engine can generate between 25,000 and 29,000 pounds of thrust. The F-15C's normal weight is only 45,000 pounds, which means its thrust is actually greater than its weight! This lets it accelerate quickly, even while climbing in altitude.

The F-15 also has very low wing loading, meaning it has a lot of wing area for its weight. Greater wing area means greater lift, which makes the plane more agile. It can take off, ascend and turn much more quickly than an ordinary plane, which has much more weight per square foot of wing space.