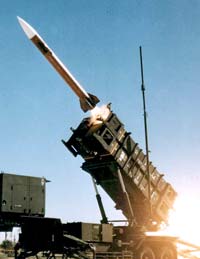 The Patriot missile system has a remarkable goal: It is designed to detect, target and then hit an incoming missile that may be no more than 10 to 20 feet (3 to 6 meters) long and is typically flying at three to five times the speed of sound. The upgraded Patriot system can also destroy incoming aircraft and cruise missiles.

The Patriot missile system has been deployed in many situations because it is able to shoot down enemy missiles (e.g., Scud missiles) and protect soldiers and civilians from a missile attack. Patriot missile batteries were activated several times in the Iraqi war and were used extensively in the 1991 Gulf war. In this article, we will look at the technology that allows a Patriot missile to accomplish its goal.

Like the Stinger missile and the Sidewinder missile, the Patriot is a guided missile. However, the Patriot is somewhat more sophisticated. In both the Stinger and Sidewinder missiles, the infrared seeker is sensitive to engine heat. A human being is responsible for finding and identifying the target, appropriately aiming the missile so that the its heat-seeking eye can lock onto the target, and then firing the missile.

A Patriot missile, instead, depends on radar. The Patriot missile system uses its ground-based radar to find, identify and track the targets. An incoming missile could be 50 miles (80.5 kilometers) away when the Patriot's radar locks onto it. At that distance, the incoming missile would not even be visible to a human being, much less identifiable. It is even possible for the Patriot missile system to operate in a completely automatic mode with no human intervention at all. An incoming missile flying at Mach 5 is traveling approximately one mile every second. There just isn't a lot of time to react and respond once the missile is detected, making automatic detection and launching an important feature.

While the Stinger is a shoulder-launched weapon and the Sidewinder launches from aircraft, Patriot missiles are launched from Patriot missile batteries based on the ground. A typical battery has five components:

In the following sections we will look at each of the different components and then how the system operates as a whole.