The Launcher and Other Systems 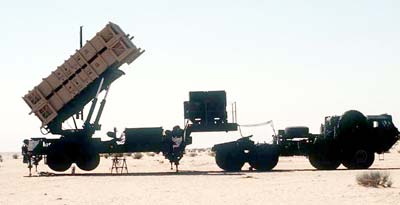 A Patriot missile battery can have up to 16 launchers. All of the launchers in the battery communicate with the single ECS van through either fiber-optic cables or radio links. The ECS van sends commands to the launchers to fire the missiles.

Each launcher is about the size of a tractor-trailer rig. A launcher can hold four PAC-2 missiles or 16 PAC-3 missiles. After firing its missiles, a re-supply truck with a crane pulls up next to the launcher to load it with new missiles.

Each launcher has its own power supply to power the electronics and point the missiles, although a Patriot missile does not have to be aimed directly at the target when it launches.

Each Patriot missile battery has one high-power radar antenna that plays a variety of roles. The antenna can:

The traditional image of a radar antenna is the rotating, parabolic antenna seen on top of airport control towers and aircraft carriers. The Patriot system instead uses a phased array antenna. This antenna contains 5,000 phase-shifting elements that allow the antenna to send out multiple, narrow, precisely aimed radar beams that scan the sky. With these beams, the Patriot's radar can track up to 100 potential targets as well as up to nine outbound Patriot missiles. The radar antenna has a 63-mile (100-kilometer) range.

Inside the van there are two radar consoles. Operators can see the status of all of the targets that the system is currently tracking. Operators can let the system run in fully automatic mode, or they can intervene to select or deselect targets. There is also a communication station that allows the battery to communicate with other batteries or with the command center for the region.