How does stealth technology work? 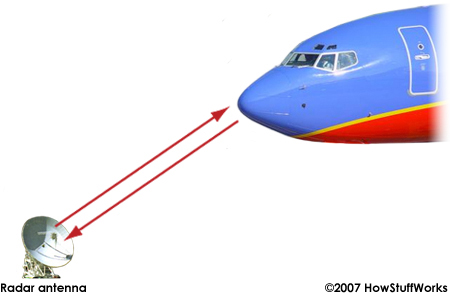 The article How Radar Works talks about the basic principles of a radar system. The idea is for the radar antenna to send out a burst of radio energy, which is then reflected back by any object it happens to encounter. The radar antenna measures the time it takes for the reflection to arrive, and with that information can tell how far away the object is.

The metal body of an airplane is very good at reflecting radar signals, and this makes it easy to find and track airplanes with radar equipment.

The goal of stealth technology is to make an airplane invisible to radar. There are two different ways to create invisibility:

Most conventional aircraft have a rounded shape. This shape makes them aerodynamic, but it also creates a very efficient radar reflector. The round shape means that no matter where the radar signal hits the plane, some of the signal gets reflected back:

A stealth aircraft, on the other hand, is made up of completely flat surfaces and very sharp edges. When a radar signal hits a stealth plane, the signal reflects away at an angle, like this:

In addition, surfaces on a stealth aircraft can be treated so they absorb radar energy as well. The overall result is that a stealth aircraft like an F-117A can have the radar signature of a small bird rather than an airplane. The only exception is when the plane banks -- there will often be a moment when one of the panels of the plane will perfectly reflect a burst of radar energy back to the antenna.