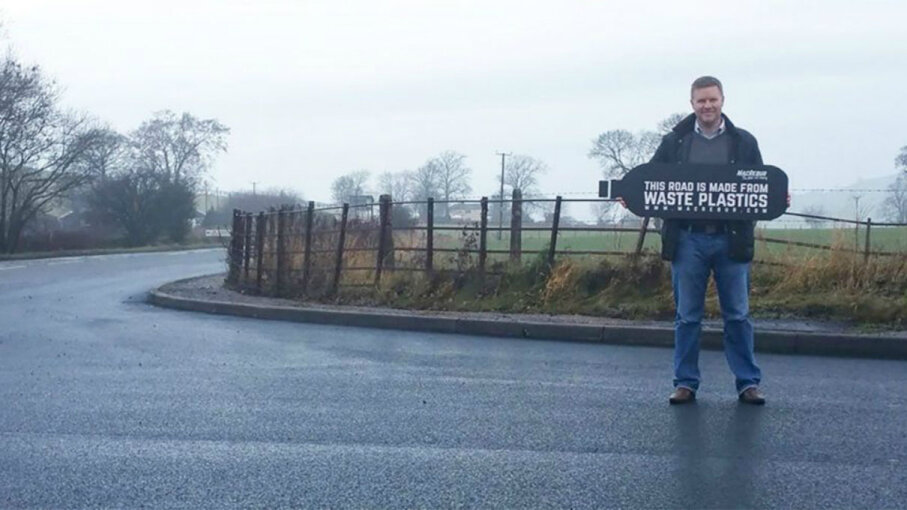 A few years ago, engineer Toby McCartney was working in southern India with a charity that aided pickers who worked at landfill sites harvesting reusable items and selling them. McCartney discovered that plastic waste they retrieved was being put into potholes in roads, doused with gasoline, and set afire. When the plastic melted into the holes and then hardened, it filled them.

When McCartney returned to Scotland, he told two of his friends about what he had seen. As MacRebur co-founder and chief operating officer Gordon Reid recalls, they decided that it would work better to use plastic waste to create a new type of material specifically designed for use in roads. After a year of research, they developed a method for transforming a mix of industrial and consumer plastic waste into pellets of a new material that could replace asphalt, the oil-based sealing material that holds asphalt together in roads.

Since MacRebur started operations in April 2016, the company's recycled plastic road-building material has been used to build roadways in places ranging from Australia to Dubai, according to the Daily Record, a Scottish newspaper.

"We've got roads on every continent," Reid notes. "And we've had interest from round about 50 countries in the world. The company currently is having discussions with a university in California about building a test road to demonstrate that its plastics are compatible with standards in the U.S.," he says.

The Plastic and Bitumen Mixture

According to Reid, using recycled plastic for road building sounds simple, but it actually requires a complex process to create the right material. "Different plastics do different things to bitumen," he explains. "If you use the wrong mix, it actually can make the bitumen more brittle."

MacRebur avoids using PET bottles and other types of plastic that are easily recycled, and instead concentrates on types of waste plastic that might otherwise end up buried in the ground. Reid declined to go into too much detail, so as not to reveal too much about MacRebur's proprietary process.

In addition to keeping plastic out of landfills, the company's plastic road materials can save about 1 ton (.907 metric tons) in carbon dioxide output for each ton of bitumen that the plastic replaces, according to this fact sheet from MacRebur's website.

The company has developed different types of road-building plastic for different environments. One variety is designed for roads in places such as the Middle East, where more tensile strength is needed to resist asphalt's tendency to deform from heat. Another is designed to be more flexible, and resist the freeze-thaw cycle in colder places such as Canada or Scotland, Reid says.

MacRebur's current products are capable of replacing between six and 20 percent of the bitumen in roads, but Reid is hopeful that within two years, improved versions will replace as much as 50 percent.

Reid says that MacRebur's plastic road materials physically bind with the bitumen, which prevents it from breaking loose and getting into the environment. "The plastic melts into the bitumen and it becomes the same, since they're both hydrocarbons," he explains.

In the U.S., plastic already is being used in road maintenance. University of Texas at Arlington civil engineering professor Sahadat Hossain, director of the school's Solid Waste Institute for Sustainability, has turned to recycled plastic as a way to solve the problem of unstable soil on highway slopes, which eventually can cause the road surface to fail as well. He's developed a technology for taking plastic from landfills and then recycling it to manufacture giant pins that are inserted in the failing soil to stabilize it.

The recycled plastic pin "has been successfully tested as a laterally loaded pile in different highway slope stabilization projects in the state of Texas, Iowa and Missouri," Hossain explains in an email. "The Texas Department of Transportation has adopted the recycled plastic pin as one of their approved slope stabilization methods." It takes just three to four minutes to install each of the pins in the ground, so an entire unstable area can be shored up in a few days, he says.

"Once [the pin] is installed into the ground, it is less susceptible to degradation, which makes it a long-lasting solution for slope repair," Hossain says.

According to Hossain's UTA web page, each recycled pin utilizes about 500 plastic soda bottles. At one of the demonstration sites, Hossain's research group put 600 plastic pins into the ground, making use of 300,000 plastic bottles that otherwise would have ended up in landfills.

Hossain thinks that the Chinese government's recent decision to ban imports of plastic waste for recycling could create an opportunity for U.S. entrepreneurs to make road materials. China imported 776,000 metric tons of waste plastic from the U.S. in 2016, according to Chemical and Engineering News.

"I am positive more and more roads will be constructed using recycled plastics," Hossain says.

But more work needs to be done to develop new methods, including full-scale testing and life-cycle analyses of roads containing plastic materials, he says.