The Key Components of a Scanning Electron Microscope 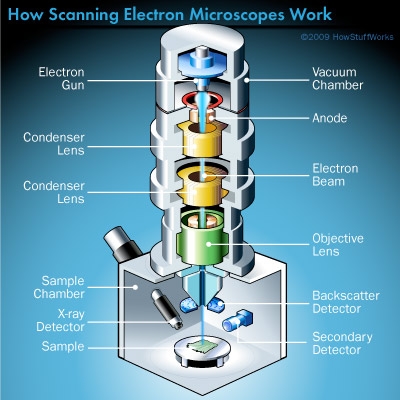 We've begun to get an idea of what SEMs are capable of. Now we're ready to take a look at the various components of one and how they work together to form an image. While the variations from one model to the next are seemingly endless, all SEMs share the same basic parts.

Electron gun: Electron guns aren't some futuristic weapon used in the newest Vin Diesel movie. Instead, they produce the steady stream of electrons necessary for SEMs to operate. Electron guns are typically one of two types. Thermionic guns, which are the most common type, apply thermal energy to a filament (usually made of tungsten, which has a high melting point) to coax electrons away from the gun and toward the specimen under examination. Field emission guns, on the other hand, create a strong electrical field to pull electrons away from the atoms they're associated with. Electron guns are located either at the very top or at the very bottom of an SEM and fire a beam of electrons at the object under examination. These electrons don't naturally go where they need to, however, which gets us to the next component of SEMs.

Lenses: Just like optical microscopes, SEMs use lenses to produce clear and detailed images. The lenses in these devices, however, work differently. For one thing, they aren't made of glass. Instead, the lenses are made of magnets capable of bending the path of electrons. By doing so, the lenses focus and control the electron beam, ensuring that the electrons end up precisely where they need to go.

Detectors: You might think of an SEM's various types of detectors as the eyes of the microscope. These devices detect the various ways that the electron beam interacts with the sample object. For instance, Everhart-Thornley detectors register secondary electrons, which are electrons dislodged from the outer surface of a specimen. These detectors are capable of producing the most detailed images of an object's surface. Other detectors, such as backscattered electron detectors and X-ray detectors, can tell researchers about the composition of a substance.

Vacuum chamber: SEMs require a vacuum to operate. Without a vacuum, the electron beam generated by the electron gun would encounter constant interference from air particles in the atmosphere. Not only would these particles block the path of the electron beam, they would also be knocked out of the air and onto the specimen, which would distort the surface of the specimen.

As with many things, an SEM is more than the sum of its parts. Read on to see how all of these components work together to create astounding images of very, very tiny things.