by Maria Trimarchi
The deliciousness of bacon is not up for debate. ©iStock/Thinkstock

There's no denying to the many bacon lovers that bacon is delicious. But it's not very good for you -- in fact, it's one of the worst things you can eat. One average serving of bacon -- three slices -- contains 435 milligrams of sodium -- about one-fifth of the average adult's daily allowance [source: Magee].

An average healthy adult eating a 2,000-calorie-per-day diet should aim for 45 to 65 percent of those calories to come from carbohydrates, preferably unrefined (and remember, carbs include all the sugar you eat, not just bread and pasta). You also want no more than 66 grams of fat (including less than 20 grams of saturated fat) and no more than 2,400 milligrams of sodium per day [source: Klein, Jacob].

If your daily diet is full of junk foods such as fried foods, processed deli meats, bacon and soda, you have an increased risk of some major health conditions -- and if you eat these kinds of foods six days a week, you increase your risk of stroke by 41 percent compared to if you only indulged in them once a month [source: AP].

Following nutrition guidelines and eating healthy foods does make a difference. People who eat five servings of fruits and vegetables every day live longer than people who don't. But even if you'd rather have a slice of apple pie than an apple, you can make healthier choices, at least avoiding the foods you know absolutely aren't good for you [source: Paddock].

Refreshing? Yes. Good for you? No way. ©iStock/Thinkstock

Drinking soda is like drinking liquid candy. Seriously. Sodas are sugary calorie bombs that have contributed to the obesity epidemic in our country -- and our soda habit has also been linked to an increased risk of certain cancers, premature aging and hormone disruption.

Most sodas contain high fructose corn syrup (which is where all the calories come from), food dyes, preservatives and other sketchy ingredients. And your soda habit isn't just making you fat; it's also linked to cavities and tooth decay. Some sodas also contain an ingredient called brominated vegetable oil (BVO); BVO is supposed to keep the artificial flavors and the rest of your soda from separating -- and it also keeps plastics flame retardant and is linked to memory loss, nerve disorders and skin conditions. Diet soda drinkers also need to worry about the impact of artificial sweeteners on their health, which we'll go into detail on next.

The colored packets of artificial sweeteners that sit on restaurant tables everywhere may be low in calories, but that doesn't mean they're good for you. Image by HowStuffWorks staff

Every year, each American consumes more than his fair share of sugar -- about 150 pounds (68 kilograms) of it. And about 29 pounds (13 kilograms) of that is table sugar -- the granulated kind, which is also called sucrose [source: Casey]. Some comes from honey, maple syrup or fructose (which is naturally found in fruits), but many of us also have a bad sugar substitute habit.

There are five artificial sweeteners, also called non-nutritive sweeteners, that the FDA considers safe for humans to eat: acesulfame potassium (acesulfame K), aspartame, neotame, saccharin and sucralose [source: USDA]. Some sugar substitutes may leave you with a bad taste in your mouth, literally, but that's not the only thing bad about them. While we love our artificial sweeteners because they're zero or low-calorie, we really don't know how bad they are for us. There have been some confusing claims over the last few decades, but at the end of the day, these sugar-free sweeteners may be significantly increasing your risk of health problems such as weight gain as well as metabolic syndrome, Type 2 diabetes and cardiovascular disease [source: Scutti].

You might not be able to taste the anti-foaming agents in your condiments, but they’re there. ©iStock/Thinkstock

Shelf-stable condiments sure do make life a little easier -- we won't argue that. We're talking about those condiments that are kept at room temperature -- single-serving packets or tubes of dips, self-serve pumps of your favorite sauce, bottles of ketchup and other sauces and salad dressings that sit out on the table at your local diner, and even those little prepackaged creamers for your coffee. Convenient, yes, but at what price?

There's a reason these foods can skip the refrigeration, and it's not because they're dried or fermented as shelf-stable foods of the past were; these condiments have been engineered not to deteriorate -- and that means preservatives and additives such as food coloring, sweeteners, salt, bad fats (such as trans fats, which are linked to premature heart disease) and chemical agents such as dimethylpolysiloxane for texture. (That example, dimethylpolysiloxane, is used as an anti-foaming agent in ketchup and many processed and fast foods -- think about that: Should ketchup foam?) Any fiber, good fats and nutrients are stripped out in the process.

Your grilled swordfish entrée may contain an ingredient you didn’t want -- mercury. ©iStock/Thinkstock

Most fish and shellfish can be part of a healthy diet. They're packed full of protein and are good sources of fats (they're low in saturated fat and full of omega-3 fatty acids). Most also contain mercury, at least some amount, and some fish contain more than others. Swordfish, for example, is one of those mercury-dense varieties (also included on this fishy list are king mackerel, marlin, orange roughy, shark, and tilefish). Albacore tuna, too, contains more mercury than canned light tuna, so choose wisely.

High levels of mercury in the fish we eat may harm the developing brain and nervous system of a fetus or young child because mercury is a neurotoxin, and because of this the FDA and EPA recommend against eating these fish, especially if you're pregnant, may become pregnant or are a nursing mother -- and kids need to avoid it, too.

The sodium in processed meats is far more than what you should be consuming. ©iStock/Thinkstock

According to researchers, eating processed meats will lead to your early death.

Processed meat -- that includes bacon, ham, hot dogs, sausages, salami and whatever meat bits are used in ready-to-eat deli meats -- has been found to increase your risk for cardiovascular diseases as well as certain cancers. In fact, researchers from the Harvard School of Public Health found that people who regularly eat 50 grams (about 2 ounces) of processed meat -- that equals one hot dog or 1-2 slices of luncheon meats on a sandwich -- have a 42 percent greater risk of heart disease as well as a nearly 20 percent risk of developing Type 2 diabetes than people who don't eat them [source: Micha]. Additionally, researchers at the University of Zurich concluded that more than 3 percent of deaths could be prevented if we all limit our processed meat consumption to less than 20 grams per day (just about three-quarters of an ounce), which is about the size of a matchbook -- and only on a special occasion [source: Rohrmann, Abrams].

Pre-packaged microwave popcorn is ultra-convenient, but it’s also got a dark side. ©iStock/Thinkstock

Movie-theater popcorn may be bad for you because of the oils it's popped in and the butter on top, but at least making it doesn't cause "popcorn lung" -- don't laugh, that's a real disease. It's also known as bronchiolitis obliterans.

Butter-flavored microwave popcorn doesn't really get its flavor from butter; it gets it from chemicals and flavoring agents. Diacetyl is what most people will point a finger at when they talk about how the health risks of microwave popcorn. Diacetyl is a butter-flavoring agent used in microwave popcorn -- by the end of the 2000s, some manufacturers banned its use in popcorn bags because of its respiratory risks (and, separately, a link to Alzheimer's disease), but you'll also find it giving a buttery flavor and smell to baked goods, candy and margarine.

Additional concern with microwave popcorn is what's in the bag -- aside from the popcorn. Without all the added chemicals, the popcorn would be an OK snack (high in carbs but low in fat – and a whole grain), but there are many chemicals coating the inside of the bag to keep the oils needed for popping from soaking through the paper, as well as chemicals to keep the bag from catching fire during the popping process. These chemicals also produce perfluorooctinoic acid (PFOA), which the EPA considers a likely carcinogen [source: Kotz]. Somehow, microwave popcorn doesn't smell so good anymore.

Want to DIY your microwave popcorn and skip the chemicals? Toss popcorn kernels in a brown paper bag, double fold the top of the bag, and pop as you would the processed stuff. You can also use a microwave-safe bowl with a plate on top to keep kernels contained as they pop.

This break room and meeting classic isn’t doing you any favors. ©iStock/Thinkstock

Your average bagel is going to cost you about 350 calories, and that's before you add any toppings. But bagels are bad for you beyond their caloric content (and what that will do to your waistline) -- most of them are made with refined white flour, which means all the good vitamins, minerals and fiber have been processed out of them. Refined white-flour foods are linked to weight gain, heart disease and Type 2 diabetes. And not only do they lead to weight gain, they also make it more difficult to lose weight, too.

Not all bagels are this bad for you; choose one made with 100 percent whole grains, choose a smaller, mini bagel or try this trick: If you scoop out some of the soft bready interior from the inside of the bagel, you could save as many as 100 calories [source: Zuckerbrot].

Check the label on your margarine to make sure it doesn’t contain trans fats. ©iStock/Thinkstock

Stick margarine used to contain trans fats, also known as partially hydrogenated oils, and some brands still do (always read the ingredient label); trans fats are considered one of the worst -- if not the worst -- fats for you to eat.

Not all dairy products are bad, and many offer health benefits. Some consumers switch to organic dairy products to get the nutrition perks but avoid unwanted components. ©iStock/Thinkstock

If you're worried about the saturated fat in dairy, you could switch to nonfat milk, but you're still not escaping a few other unhealthy things -- namely, recombinant bovine somatotropin (rBST, or bovine growth hormone). Bovine growth hormone is a genetically engineered synthetic hormone given to cows to boost their milk production, and it's controversial because it may introduce health risks not only to the cows but to humans consuming these dairy products.

Deep fried foods sing a siren song of deliciousness. Unfortunately, those tasty snacks are truly horrible for you. ©iStock/Thinkstock

Deep-fried foods are the weakness of many; even First Lady Michelle Obama has confessed her love for french fries. One of the problems with eating deep-fat fried foods is that cooking foods at such high temperature may cause them to form toxic chemical compounds -- that we then eat. You see, too many french fries won't only increase your waistline (which they will); your side order is also linked to health problems such as stroke and an increased risk of certain cancers including breast, esophageal, head and neck, lung, pancreatic and prostate. Men, for example, who eat fried foods -- doughnuts, fried chicken, fried fish and/or french fries -- once or more per week increase their risk for prostate cancer as much as 30 to 37 percent [source: Paddock]. 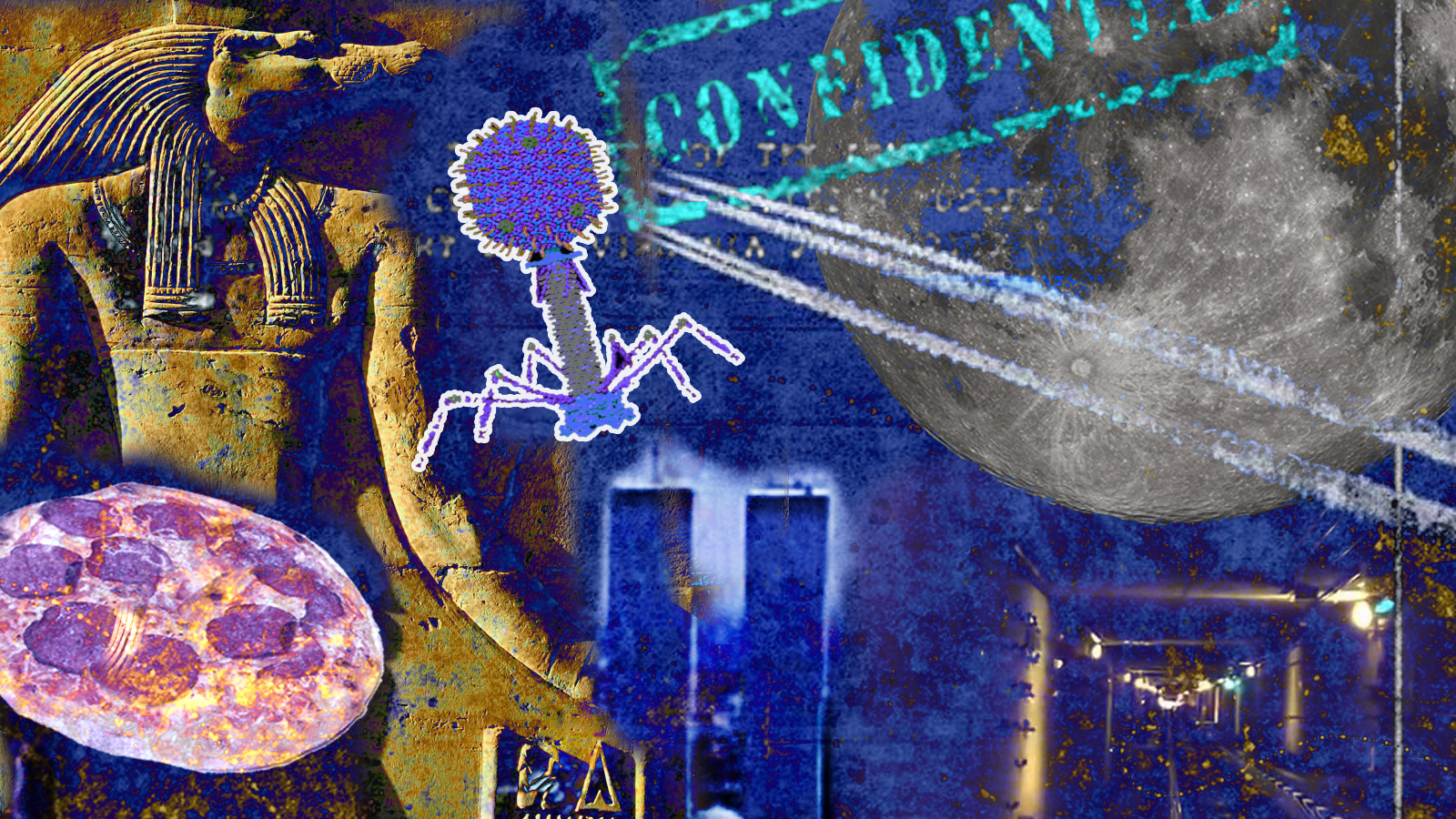 Is the world run by the Illuminati or just some reptilian overlords? Test your knowledge of conspiracy theories with this HowStuffWorks quiz.

I love potatoes; baked, roasted, grilled -- I won't turn down a potato in any form. And that, unfortunately, includes french fries. And tater tots. Oh, and hash browns at the diner. Despite knowing better than to succumb to their deep-fried wiles, I eat them. We all have our vices, right?