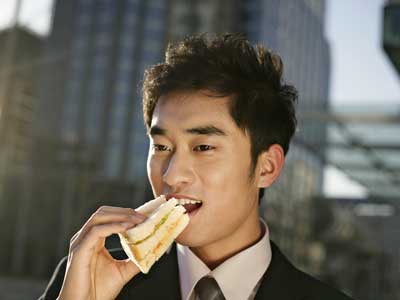 Without wheat, this man would have a hard time eating his lunch on the go. Without bread to make our sandwich technology possible, would human civilization have ever made it out of the Stone Age?
Adam Pretty/Taxi/­Getty Images

It's easy to take bread for granted. After all, what's a baguette but something to sop up the last of­ your soup with? When enjoying a sandwich or slice of pizza, many of us even throw the crust in the garbage, right next to the bread loaf heels. But bread and other wheat products -- like pasta and cookies, of course -- have become an important part of many human diets, especially as Earth's population continues to grow. How many times have you heard "bread and water" mentioned as the most basic meal imaginable?­

Humans have cultivated wheat for roughly 10,000 years, and archeologists have discovered evidence of milling operations in Asia that date back 75,000 years [source: Encyclopaedia Britannica]. But the origins of humanity's relationship with wheat go back even farther than that, all the way into the murky depths of prehistory. Long before the agricultural revolution, hunter-gatherers picked through the rich vegetation that surrounded them. Among the fruits and vegetables, they came across wheat stalks and quickly discovered the grains were edible.

­Today, humans devote more farmland to wh­eat than any other food crop. The plant dominates an estimated 500 million acres worldwide [source: Perdue University]. Combined, these fields yield a global harvest of approximately 661 million tons (600 million metric tons) each year [source: Encyclopædia Britannica]. Roughly 10 percent goes right back into the ground to ensure future harvests, but most of the rest goes on to feed humans and livestock around the world.

­In this arti­cle, we'll examine the wheat cereal grasses and look at just how we turn fields of grass into everything from the simplest porridge to the ritziest wedding cake.