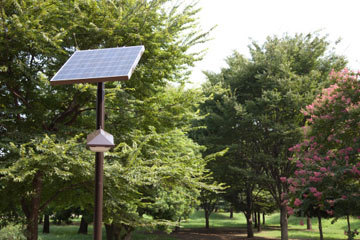 As this image shows, even powering something as simple as a park light can require a large solar panel to gather the necessary energy.
iStockphoto/ThinkStock

But converting solar energy into electricity is tricky. Photovoltaics can do the trick. These are materials that can absorb photons -- the basic quantum units of light -- and convert them into electricity. Edmond Becquerel discovered the photovoltaic effect in 1839 while experimenting with an electrolytic cell. Becquerel noted that the output of the cell increased when exposed to light. But it would take more than a century to advance photovoltaics to the point that they were efficient enough to generate the electricity needed to power simple electrical devices.

In 1954, Bell Telephone Laboratories built a solar cell with an efficiency of about 6 percent [source: American Physical Society]. That means the cell was able to convert 6 percent of the total energy it received into electricity. That's incredibly inefficient -- 94 percent of the energy from the sun goes to waste. You'd have to link many solar cells together into solar panels to generate a significant amount of electricity.

Today, engineers and scientists have advanced solar panel technology so that efficiencies of 30 percent or greater are possible. That means you don't need as many of today's solar cells to generate any given amount of electricity. And you must align the cells in a single layer across an area to receive enough sunlight to meet electrical needs. For a home, this might mean covering a significant percentage of the roof with solar cells or building a freestanding solar panel somewhere on the property. Large businesses might need enough solar panels to cover a football field or more to meet energy needs.

Solar cells are also expensive. While the energy solar cells provide is free, the cost of materials and installation tend to be high. Installing solar cells for your house requires a significant up-front investment. Some states provide tax incentives to help offset the cost and you may even be able to sell some power back to the electrical grid, depending upon your power company. But solar cells are still a hefty investment in the short term.

Despite all those caveats, solar cells are still a great way to get electricity. They can pay for themselves after a few years and the energy they provide doesn't contribute to pollution. Once a system pays for itself, the electricity it generates is essentially free!

Next, we'll look at some efficient uses for solar energy.