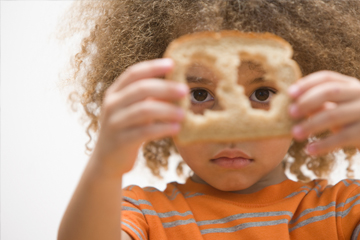 Eating bread crust might not curl your hair, but it may be good for your health.
KidStock/Getty Images

If someone you love were about to consume Pop Rocks with soda, would you intervene? If a cupcake has been on the ground for only four seconds, is it OK to eat? If you answered "yes" to these questions, perhaps you also believe the age-old adage that consuming the crust of bread will give you curly hair.

There is absolutely no evidence published in any peer-reviewed publication to support the notion that eating bread crust gives you curly hair. But please keep reading. There are other important points to make about bread crusts.

While it's highly unlikely that eating bread crust will cause your hair to curl, it might improve your health. For decades, moms have been tell kids that if they don't eat their crust, their hair will fall out, fall limp or somehow fall incorrectly. Though compelling for a lot of children, the threat is unequivocally false.

However, there is evidence of a higher concentration of nutrients in the crust of bread than in the soft center. In 2002, a team of German researchers compared the crust of baked bread to the soft part at the center and found that the crust had eight times more of a cancer-fighting antioxidant [source: Lindenmeier]. Mom may not always be right for the right reasons, but she's always right.

It's important to note that if you're trying to maximize nutrition, you should opt for wheat bread over white. Because of processing that removes nutritious parts of the flour in white bread, wheat emerges victorious in the competition for most vitamins, minerals and fiber [source: Lasko].

The origin of the myth that bread crust gives you curly hair is likely Europe several hundred years ago, where a thick head of curly hair was known to be a sign of optimal health [source: Juan]. During times of scarcity, one's "daily bread" was no guarantee. Going without such nutritional basics on a regular basis likely caused hair loss [source: Rushton].

The main takeaway is, if you eat bread, do so with the crust intact.