Should you wear light-colored clothes in hot weather to stay cool? 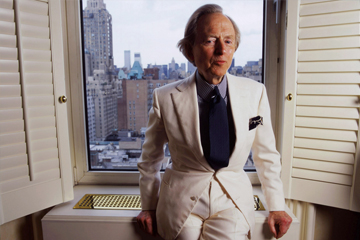 Tom Wolfe is famous for wearing white suits, but does the dapper author's light clothing keep him cooler during the warmer months?
David Corio/Redferns/Getty Images

Question: What do astronauts, brides and Tom Wolfe have in common? They all wear white to keep the heat at bay. (That's probably all they have in common, but you never know.) Anyway, the sartorial thinking is this: floaty, breezy, delicate fabrics of the lightest colors allow all that solar heat fighting its way to our skin to just reflect away instead.

Wear dark fabrics, the idea goes, and you're stuck with that heat as it greedily absorbs into the fabric and causes you to swelter in your own clothes. But white clothing will cheerfully bounce that solar heat right off, and you'll be (more) comfortable on a hot day. And that, my friends, is why Tom Wolfe is so cool. The end.

Well, not exactly. Because while all that certainly sounds great in theory, there are a few other factors at play that might be working against the light clothing adage. At the very least, there's some compelling evidence — in the form of a real, true scientific study — that says it doesn't matter. Let's start with some 1980 academic research from the journal "Nature," titled "Why do Bedouins wear black robes in hot deserts?" [source: Shkolnik et al].

As you can guess, the researchers were as flummoxed as you and I by the fact that in oppressive heat, the residents of the Sinai desert wear billowing black robes instead of, say, white (or a maybe pretty pale lavender). What they found was when they tested white robes versus black (and note they did this by having some poor guy stand out in the heat while recording temperature), the differences were nil. They found that the black clothing did absorb more heat, but that's where it stayed: In other words, the black soaks up additional heat, but that extra is lost by the time it actually gets to your skin [source: Abrahams]. Way more useful for keeping cool, however? The fact that the robes are loose and billowing, to allow airflow.

There's also an argument that the whole "light clothing" argument is missing a key element: the person who's wearing the clothes. This means that the heat your body radiates will actually reflect off white clothing, bouncing back to your body to keep you toastier. Not a bad theory, but it's also not tested on humans — it's only been studied in birds with white plumage, with mixed results [source: Walsberg et al.].

So, the answer is — it doesn't make a huge difference whether you're wearing black or white in hot weather. As long as you keep your clothes loose, you're probably going to feel the same as the poor sucker next to you.