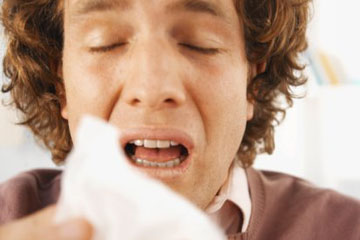 Why do your eyes close when you sneeze?
Stockbyte/Getty Images

You're 5 years old, and word on the playground is that if you sneeze with your eyes open, they'll pop right out of your head. Given that you've got a nasty cold, this rumor is relatively terrifying for you. After all, what could be worse than your eyeballs shooting out of your face like bullets?

Now let's fast-forward to adulthood, a time in which you're no longer terrified of eyeball expulsion but nevertheless still wonder about that sneezing myth of yore. Does it have any truth to it? Exactly how securely are your eyeballs attached to your head?

To debunk this myth, let's first take a look at what's going on inside the body during a sneeze. Sneezing is a protective mechanism that the body uses to expel dust, pollen, pet hair and other allergens. Some people sneeze when they're exposed to cold air. It's common to sneeze when you have a cold because the inside of the nasal cavity becomes swollen and more sensitive than usual. This sensitivity triggers sneezing at the slightest irritation.

The act of sneezing is involuntary, but the body goes through a very systematic process during the act. When an irritant comes in contact with the nasal lining, the nerves in the area send a message to the lower portion of the brain, known as the medulla. The brain then triggers the activity necessary for the body to sneeze:

The muscles in the chest expand, the diaphragm contracts, and the lungs fill with air. The muscles that are in the back of the throat and vocal cords also contract, and then the stomach and chest muscles follow suit. Finally, the sneeze is expelled through the mouth, sending between 2,000 and 5,000 droplets of mucus and air flying away from the body at between 70 and 100 miles per hour (112.6 and 160 kph) [source: Washington Post]. The spray from a sneeze can extend 5 feet (152.4 centimeters) from the sneezer [source: Library of Congress]. This spray is made up of saliva and mucus. Expelling the mixture through the mouth clears the nasal cavity.

One other thing happens during this process: Your eyes squeeze shut. But why? There's got to be some legitimate reason, right?

How Are the Eyes Attached to the Head?

To understand whether your eyes are likely to detach from your body during a sneeze, you first need to understand how they're attached to your head. If all that's holding them in place is the flimsy piece of skin known as the eyelid, then that would make sneezing awfully dangerous.

Think about how many times you've watched someone out of the corner of your eye or rolled your eyes at some inane thing your friend said. Those eye movements are powered by muscles -- the same muscles that keep your eyes where they belong. The medial and lateral rectus, superior and inferior oblique and superior and inferior rectus muscles are all attached firmly to the eye. And they aren't going to let it roll out on the floor.

The purpose of eyelids is to protect the delicate eye area from injury and debris. Blinking acts as a wash for the eyes, freshening them with the vitreous fluid that's part of the eye. Tear ducts drain into the back of the nose, which is why crying leads to a runny nose. It's also the reason that sneezing can lead to teary eyes. The pressure built up when you sneeze can temporarily prevent the tear ducts from draining.

So, if the eyes are so firmly attached, why the widespread belief that sneezing with your eyes open will blow them right out of your head? Perhaps it's that it seems impossible not to close your eyes when you sneeze. And if we can't force our own eyes to stay open during a sneeze, there must be a good reason for them to involuntarily shut, right?

Usually, sneezing is how the body rids itself of irritants. But approximately 25 percent of people sneeze for a different reason. They have a genetic condition known as photic sneezing and are likely to sneeze when they walk outside on a bright day or look at a bright light. Scientists believe the condition is the result of something called cross talk. Cross talk is a term used to describe what happens when two closely related nerves -- in this case, the optic nerve and the trigeminal nerve that controls sneezing -- get their signals crossed. The trigeminal nerve consists of branches in several parts of the face, including parts of the eye, the nose, including the sinus cavities, and the palate. When nerves are closely bundled, cross talk is common.

Why Do Your Eyes Shut When You Sneeze?

Some people's eyes don't shut when they sneeze, but most people's do. So if there's no concern that our eyes will pop out of our heads, then why do they close automatically?

You might think the eyes close as a defensive mechanism -- to keep all those projectile germs and bacteria out of the eye. But that's unlikely to be the case since the force of a sneeze sends the particulates away from the face, not toward it.

The more likely reason that eyes close during a sneeze is for no reason. It's just an involuntary reaction with no real purpose. The eyes may close during a sneeze for the same reason your leg kicks out when your knee is tapped. It's not just the muscles in your eyelids that react during a sneeze. Many muscles all over your body react. For example, many people with stress incontinence experience urine leakages when they sneeze -- the result of those muscles tensing and releasing involuntarily.

So it's a pretty disappointing conclusion: The body forces your eyes to shut during a sneeze, but there's no real purpose for this action. Instead, it's a reflex that may have had a purpose at one time, but serves no function now.

Sneezes -- Nothing to Sneeze At

Sneezing is serious business according to these myths:

How the Hum Works
What's Going on With Detroit's Mysterious Zug Island?
Monster Science Digs Up Some Vampire Vixens From Nature