What is string theory? 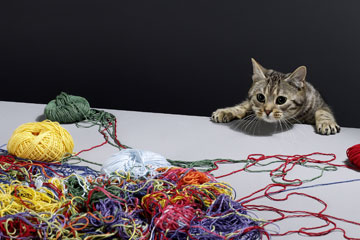 Pull a loose thread on a cartoon garment and what happens? That's right, the character's sweater completely unravels, leaving only a pile of string and some animated nudity. That's cartoon physics for you, but it's also a lot like the very serious business of superstring theory. Break everything down to its simplest form and all you have is a pile of incredibly tiny bits of string.

Particle physicists define elementary particles or fundamental particles as the smallest building blocks in the universe. In other words, particles such as leptons and quarks have no substructure. They're as small as it gets.

That's not the case for string theorists, who think we need to venture deeper (or smaller) than our current technology allows. They propose that each so-called fundamental particle actually contains a tiny, vibrating, one-dimensional loop of string. The vibration of the string determines the charge and mass of the greater particle.

Superstring theories take this idea and build the entire universe from the bottom up. And yes, it's as challenging a task as it sounds. That's why we speak of string theories in the plural, because there are several different string theories that attempt to make it all work. Oh, and at least 10 dimensions are called for, too, just for all the math involved. Physicists propose that any dimensions beyond time and visible space are folded up and out of sight.

As you probably guessed, superstring theory is still developing, meaning that physicists continue to work out kinks in the individual string theories. Eventually they're aiming to fulfill Einstein's unrealized goal of unifying general relativity with quantum theory. That's why string theory also is sometimes called a theory of everything, because it could serve someday as a foundation for all future scientific discovery and innovation.

In the meantime, the next time you look in the mirror or feel the heat of a noonday sun, remember: All of that universal activity may depend on the vibration of incredibly small loops of string.

Explore the links on the next page to learn more about the physics of our universe.