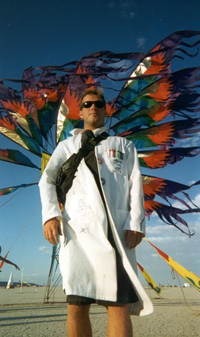 When Albert Einstein published his paper on his special relativity theory in 1905, it seemed as though he had turned the physics of Isaac Newton on its ear, but in fact, he used Isaac Newton's physics as a base on which he could build his own theories. The universe is too complex for one person to understand alone, so physicists must rely on the aggregate findings of their peers to learn just what makes the universe tick. This includes the standard model of particle physics, a theory began by Max Planck in 1900, which is arguably one of the most influential theories to date.

While many have contributed to the study of physics, not all theories have been proven correct, or even useful. Some theories are pared down, others are discarded entirely. Many researchers spend their life's work in pursuit of theories that later prove inaccurate. It is with this knowledge that A. Garrett Lisi submits his theory of everything to the world -- his "Exceptionally Simple Theory of Everything."

Newtonian physics describes why a rolling ball eventually stops. Relativity explains why you don't fly right off the spinning Earth and into space. Quantum mechanics explains why the same force that keeps you firmly planted on Earth doesn't tear you to shreds. The only problem is, none of these physical theories fully -- entirely -- explains every single aspect of the universe. What's more, while we know that the universe is influenced by four forces -- gravity, electromagnetism, and strong and weak nuclear forces -- we don't know how gravity works in conjunction with the other three. But there must be one common thread that binds them all together: A theory of everything.

Physicists have searched for the thread that unites relativity and the standard model of particle physics. If uncovered, this same thread is expected to reveal what constitutes the fabric from which our entire universe is woven. In the 1970s, physicist Michio Kaku postulated string theory. This theory of everything predicts that small, vibrating strings serve as the building blocks of all matter, and that their vibrations create all four of the forces in our universe.

But Kaku's theory requires the existence of 11 dimensions to work and, so far, we only know of four dimensions. Despite the fact that it can't be readily proven true, string theory has breathed life into the pursuit of the theory of everything, and the world of physics has invested deep inquiry into the theory.

Using yet-undiscovered aspects of physics to make scientific predictions is nothing new. The fact that scientists have yet to find tiny strings through scientific observation doesn't rule out string theory. And Einstein's special relativity mathematically predicted the existence of black holes, long before any evidence of them had been observed.

While academia has pursued its inquiry into the predictions of string theory, A. Garrett Lisi -- a Ph.D. in physics -- has lived in self-imposed exile from his field. He's spent his summers surfing in Hawaii and winters snowboarding in California. Perhaps while enjoying the snow and sea he found inspiration for what will prove to be the theory of everything.

Read the next page to find out about the beautiful shape that is the basis for Lisi's idea.