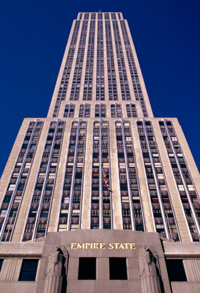 That's a long way for a penny to fall, but could it actually kill someone?
Jan Cobb Photography Ltd/Getty Images

You might have heard the tale about a person who, standing on the observation deck of the Empire State Building, throws a penny and makes a wish. In the story, the penny falls and kills a pedestrian on the sidewalk below.

This is one of those classic urban legends that is untrue but contains a grain of truth.

Throwing a penny off the Empire State Building wouldn't kill someone. A penny only weighs about a gram and it tumbles as it falls. Because of the tumbling and the light weight, there's so much air resistance that the penny never really gathers that much speed before it hits its terminal velocity. A gram of weight traveling at a relatively slow speed might hurt a little if it hit you on the head, but it's not going to kill you.

The grain of truth embedded in this urban legend is the fact that falling objects -- even ones that seem harmless -- can do a lot of damage. That's why people on construction sites wear hard hats. If a big nut or bolt weighing 50 grams (about 1.8 ounces) falls and hits you on the head, it's going to do some serious damage, and depending on the height it falls from, it could definitely kill you if it hit right on top of your skull.

To get an idea of the damage it can do, let's take a look at a bullet. A bullet might weigh 5 to 10 grams, and it leaves the barrel of a gun at anywhere from 800 to 2,000 miles per hour, depending on the type of gun, the type of bullet and the amount of powder behind the bullet. A 44-caliber bullet weighs about 9 grams. Let's assume it leaves the gun at 1,000 miles per hour. That gives it a muzzle energy of about 300 foot-pounds (1 foot-pound is the amount of energy needed to raise 1 pound 1 foot in the air). Three-hundred foot-pounds of energy is clearly enough to kill someone. Even a third of that is enough to kill someone.

A 1-gram penny falling from the Empire State Building might reach 100 miles per hour. It has a little less than 1 foot-pound of energy when it hits, and just hurts a little.

If a 50-gram nut, or a roll of pennies weighing 50 grams, were to fall from the Empire State Building, it would fall about 1,000 feet. Ignoring air resistance, it would reach a velocity of about 250 miles per hour. That gives it energy of about 100 foot-pounds, which is fatal if it hits you on the head. If you're wearing a hard hat, however, you'll survive.