Why does the shower curtain billow in on me? 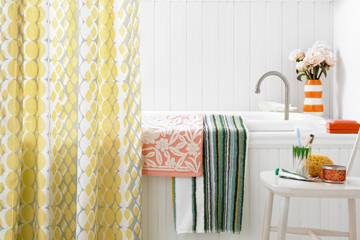 It looks so innocent – and yet.
© Lucas Allen/Corbis

You're in the shower, having a delightful time. You have the three S's to make bath time fun: soap, shampoo and Taylor Swift. (She's not there. You're just belting out "Fifteen." Don't be crass.)

Even without Taylor, it's hard to be in a bad mood in the shower. It's a magical waterfall land! A tropical destination mere steps from your DVR, with all those episodes of "Nashville"! Your hair will look like Connie Britton's real soon, you tell yourself, as you condition dreamily.

Then a horrible shower monster reaches out and grabs you with its clammy hands and wraps your body in its slimy, sweaty arms. Suddenly, you're Janet Leigh, fighting against the psycho that is your shower curtain.

As you wrestle with the sticky demon, you plead to a higher science power: "Why must our shower curtains attack us?"

First of all, you're right. Unlike the feeling that the other lanes are always moving faster in traffic, you're not making this one up. Your shower curtain is in fact billowing in on you, in an almost predatory way. Folks (more specifically: folks on the Internet) have even dubbed it the shower curtain effect.

But why does it happen? Is the shower curtain acting under a natural law? Does the plastic lining have a strong desire for the touch of human skin? Does the curtain billow backward in the Southern Hemisphere?

Peel that plastic away from your flesh and read on for more than you ever wanted to know about your shower curtain's grasp.