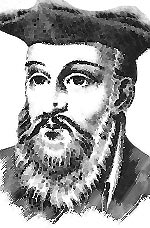 Nostradamus is the Latinized name of Michel de Nostredame, a physician and astrologer who lived in 16th-century France. The details of his life aren't always clear, and they are hotly debated among modern Nostradamus followers and critics. (This site claims that most of the accepted biography is pure myth).

It is generally agreed that Nostradamus was born in 1503, into an educated, well-to-do family of grain traders. Apparently, he was instructed in a wide range of academic subjects at an early age, including traditional sciences, math, languages (Latin, Greek and Hebrew) and astrology.

Nostradamus also received a broad religious education. His father's side of the family was Jewish but had converted to Roman Catholicism, either when Nostradamus was young or sometime before he was born. By some accounts, this heritage led Nostradamus to study Jewish scriptures, as well as the books of the New Testament. Throughout his life, according to legend, Nostradamus was interested in the apocalyptic prophecies in the Book of Revelation, as well as Kabbalah, a mystical branch of Judaism.