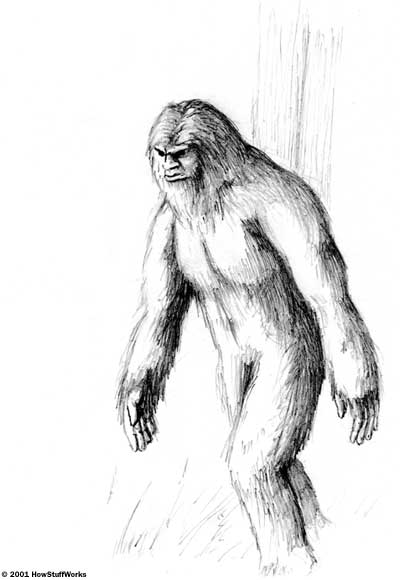 ­ ­ In ­March of 1999, a man reported a strange occurrence in northern California. He was driving up Interstate 5 to visit friends in Oregon, and around 10:00 p.m., he took an exit off the highway to see if he could find a place to get some dinner. When he couldn't find a restaurant, he decided to pull onto the side of the road and make do with some snacks he had in the car. After he ate, he dozed off, and was soon awakened by a loud thump. When he got out to investigate, he found a good-sized rock on the hood of his car. He got back behind the wheel, started the car up and turned on the headlights. In the beams, he saw an 8-foot-tall creature covered in thick, dark hair. The creature watched him for a minute, turned in the road and walked slowly off into the woods.

People have been telling stories like this one for hundreds of years -- this creature was part of Native American folklore long before Europeans arrived on the continent. In the past 50 years alone, there have been thousands of reported bigfoot sightings in the United States and Canada, and many people claim to have seen a similar creature in the Himalayas. But in all this time, with all of these alleged encounters, nobody has unearthed bones or other conclusive proof of the giant primate. This has led many zoologists to dismiss the stories as hoaxes, hallucinations and misidentifications.

In this article, we'll examine the reports of bigfoot, also known as sasquatch, and its Asian cousin the yeti, to find out what these creatures might be and where they might come from. We'll also look at the compelling evidence for and against their existence and find out why so many people believe in them.

Anatomy of a Bigfoot

People describe bigfoots, yetis and similar creatures as large primates, something like a cross between a gorilla and a human. Tales of these animals go back hundreds of years in many different cultures. In various Native American tribes, they were called "windego," "yeahoh," "omah," "rugaru" and "boqs." In Asia, the yeti, or abominable snowman, is said to inhabit the snowy Himalayan mountains. For simplicity's sake, in this article we'll call this sort of creature by its most famous name, sasquatch. This name, derived from se'sxac, literally "wild men" in the Native American Salish language, is specifically used to describe a creature found in the Pacific Northwest of the United States and in southern Canada.

According to numerous accounts of sasquatches and yetis, the creatures tower over humans and apes. Typically, they are said to be 9 to 11 feet (around 3 m) tall.

Reported sightings of these sorts of creatures vary a good deal, but there are several details that pop up over and over again. In most cases, the eyewitnesses describe a very tall primate (ranging from 7 to 15 ft / 2 to 4.5 m) that walks on two legs. It stands upright like a human being but has a unique, loping gait. The creature is generally covered in long, reddish-brown fur and has a face that is a cross between a gorilla and a human being. Many eyewitnesses report a strong, unpleasant odor, but others say that the creature has no smell.

In some accounts, the animal makes strange grunting, gurgling or howling noises. Many believers say they have never seen the creature, but have heard bizarre noises in the woods that were nothing like the sounds made by any known animal. Believers have even recorded these noises in the northwestern United States and the Himalayan mountains. In the Himalayas, many more people report hearing the creature than seeing it.

According to some eyewitnesses, sasquatches are wary of human beings but highly curious about our activities. Many eyewitnesses report that they were not at all afraid of the creature, which is surprising when you imagine the spectacle of a 10-foot ape. These people say they were sure that the sasquatch meant them no harm, that it was a shy, benign animal. In the folklore of many Native American tribes, as well as the indigenous people of the Himalayas, the animal is said to be a peaceful, supernatural creature with intelligence and spiritual powers.

In many reports of sasquatches, the eyewitnesses say the creature observed them from a distance. Others heard noises and had the strange sensation that they were being watched. Most eyewitnesses say they don't have a clear impression of the creature's intelligence, but a few folks say they've seen multiple sasquatches communicating with each other. Most stories, however, describe a single sasquatch traveling through the woods alone.

These characteristics, which show up again and again in eyewitness reports, give us a basic idea of sasquatch physiology and behavior. Using this data, theorists have developed several ideas about where the creature might have come from. In the next section, we'll look at the most likely explanation of what this animal is if it does exist.