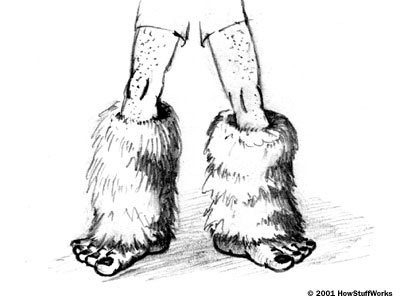 Skeptics believe that the famous "bigfoot prints," as well as the well-known sasquatch photos and home movies, are only evidence of pranksters who have a lot of time on their hands.

In the last section, we saw that many believers propose that the sasquatch is a giant primate, descended from the prehistoric gigantopithecus. Skeptics recognize that such a creature could exist, but hold that it is highly unlikely the creature could have lived close to inhabited areas for hundreds of years without anyone gathering conclusive evidence. The more likely explanation, according to the debunkers, is that several independent hoaxers have built up a collection of false evidence that has duped a very large number of people.

One of the most common types of sasquatch evidence is casts of giant footprints. Skeptics point out that this evidence is fairly simple to fake.

To make "bigfoot" prints, a prankster would just mold two large feet out of plaster, attach them to the bottom of his shoes and walk with a very long stride (possibly leaping with each step). The size and shape of supposed sasquatch footprints do vary considerably, which may indicate a number of unrelated pranksters. Sasquatch sounds could also be faked fairly easily, critics say, possibly using a computer program that alters sounds from an animal or human so the noise sounds completely alien.

As for photographic evidence (which is relatively rare), skeptics suggest that the documented sasquatches are actually people dressed in ape suits. Sasquatch-believers recognize that many photos and films are hoaxes, but they say that a few of them would be very hard to fake. The most famous piece of sasquatch evidence, the 1967 film shot by Roger Patterson in Bluff Creek, Cali., is at the heart of this debate. Several Hollywood insiders, including "An American Werewolf in London" director John Landis, have claimed that the film shows a man dressed in an ape suit. According to Landis, the suit was designed by John Chambers, the special-effects master who created the costumes for the original "Planet of the Apes" movies. Chambers denies any involvement, but the rumor persists.

Sasquatch believers say there are several details in the footage that indicate the creature is not a person. The main evidence is that the figure in the film keeps its knees bent while it is walking (see The Bigfoot Field Researchers Organization for pictures from the film). When humans walk, they lock their knees with each step, holding their legs straight. Believers also point out that the figure's skin and fur has a rippling motion, like a living creature's moving flesh, and that the surface of a costume would not move this way. Skeptics counter that the rippling-skin effect can be achieved by attaching a "water-bag" under the suit. According to E! Online: Bigfoot Movie: A Hollywood Hoax?, several Hollywood effects artists say the figure is obviously a guy in an ape suit with a water-bag fastened to his stomach.

But what about all the reported sightings? Believers make the point that people from all age groups, socioeconomic backgrounds and education levels say they've seen the creatures, indicating that the sightings are not an isolated phenomenon limited to a few pranksters and kooks. Skeptics counter that while these people aren't necessarily lying about what they've seen, they may be mistaken. A bear in the wild will stand up on its hind legs, possibly giving the impression of a tall primate. Impressions are highly subjective, skeptics note, and may be skewed when a person has heard a bunch of stories about a strange creature in the woods.

Many people want to believe in such an animal, for a number of reasons. It's a compelling idea that we could have completely overlooked such an enormous, remarkable creature all this time. Humans have always been obsessed with exploration: We yearn to uncover new things about the world. These days, many people have the feeling that there is nothing left to explore, that science and global expansion have uncovered most of the planet's secrets. The notion of the sasquatch (or other phenomena, such as the Loch Ness monster) is exciting because it restores some mystery to the world and gives ordinary people the chance to be adventurous explorers. In actuality, there is still a good deal of the planet that is unexplored (namely, the oceans). Scientists estimate that there are thousands of plants and animals left to discover under the sea, as well as in the tropical rainforests, but this is not common knowledge.

People are particularly interested in an undiscovered "ape-man" for the same reason they are fascinated by humanoid extraterrestrials. We are drawn to the idea of human-like creatures, with human-like intelligence, because it means that we are not alone in the universe. Some people believe these beings might be able to enlighten us about our own history. You can see this desire in the ancient folklore surrounding sasquatch and yeti. In these traditions, the creature has wisdom beyond our own and could provide us with spiritual guidance.

Whether the sasquatch is a real animal or only a product of hoaxes and imagination, its effect on human beings is the same. Simply put, it's a lot of fun to think that this creature exists. If somebody does finally prove the existence of sasquatches, the legend surrounding them will die out, replaced by scientific analysis. But if the creatures remain a mystery, there will always be believers -- it is nearly impossible to disprove something to everybody's satisfaction, and many people aren't interested in this sort of debunking evidence anyway. In the end, people will believe in sasquatches simply because it is exciting to do so.

If you're trying to fake photographic evidence of a sasquatch, it's not worth it to go to all the trouble of designing an ape suit. Some of the most remarkable fake sasquatch pictures are actually photos of small models, about the size of an action figure. Hoaxers carefully mold these figures, replicating eyewitness descriptions, and then place them in a natural setting. When photographed from the right angle, a small patch of ground can look a lot like a large clearing in a forest.