What are ley lines? 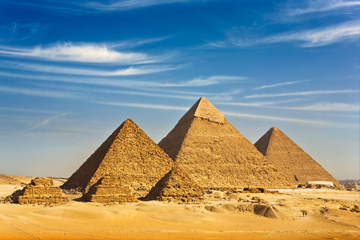 Next stop on the "energy highway"? The Pyramids of Giza!
WitR/ThinkStock

So what if I told you that there were straight lines crossing (and crisscrossing) Earth that demarcated important locations? If you're a kind of everyday normal-type person, you might think, "Ah, yes! Latitude and longitudinal lines run around the planet in straight lines, and you can find pretty much anything based on their location. Checks out!" If you're not entirely normal and everyday, your first thought might've been something more like, "Oh, right -- ley lines. The straight lines that are imbued with deep power and electromagnetic energy, which all connect important and sacred sites throughout the world. Sure. Those."

Ley lines are kind of like latitude and longitude in one sense: They're not lines we can actually see on a map. But the theory is that big, important monuments (think Stonehenge and the Pyramids of Giza) are all running on a kind of energy highway that "connects" them. The idea took hold in the 1920s, when a photographer and amateur archaeologist noticed straight lines that connected ancient sites in certain areas of the United Kingdom. It made sense: A road, for instance, might be built between an ancient place of worship and a fort [source: Macfarlane].

And maybe if ley lines were nothing more than that -- imaginary lines that seemingly connect two important things -- we would have an easier time simply accepting them. But at some point, some other interested parties hijacked the simple ideas and robustly embellished the story. Some claim that ley lines carry a powerful magnetic field, while others say they hold a psychic power [source: Crystal]. Still others are pretty darn sure that the lines are somehow associated with UFO landings -- or that there are healing properties found in the "vortex" of ley lines [source: Sacred Destinations].

Of course, no one has ever found any evidence for "energies" of any kind on the lines, and there doesn't seem to be a lot of objective basis for believing that UFOs landed there. But that doesn't stop anyone from noting that you can connect lots of important points with straight lines on a map. For instance, the Washington Monument and the Grand Canyon. That makes a straight line. Also, my house and the corner store. Another straight line.

The point is, it's not exactly "science" to get a few important points to connect, or to perhaps imbue significance on places that do fall on a parallel. You can make patterns from all sorts of locations, but it doesn't make them hold any distinct power. As is the case with ley lines: While there might be some compelling reasons that local sites are easily navigated between, it doesn't mean they have any mystic purpose [source: Radford].

How the Uncanny Valley Works
Can your hair turn white overnight?
How Ouija Boards Work