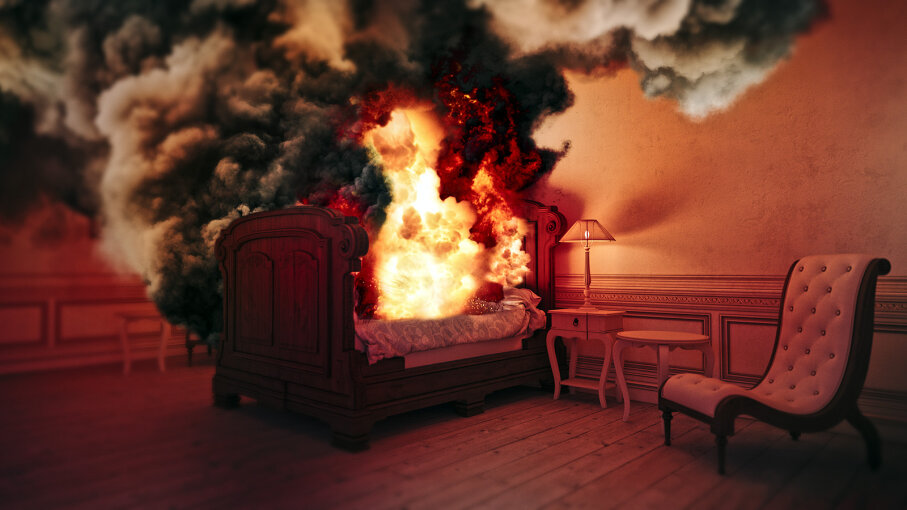 Can a person actually catch fire with no apparent source of spark or flame, and then burn so completely nothing else around them ignites? Donald Iain Smith/Getty Images

On Dec. 5, 1966, the body of 92-year-old Dr. J. Irving Bentley was discovered in his Pennsylvania home by a meter reader. Actually, only part of Dr. Bentley's leg and a foot were found. The rest of his body had been burned to ashes in his bathroom. Part of the good doctor's incinerated robe lay at the site and his walker was left propped against the blackened bathtub. But the most eye-catching clue was a massive hole in his vinyl floor. Measuring 2 feet (.6 meters) wide by 4 feet (1.2 meters) long, it had eaten into the wooden floor beams and left a pile of ashes in the basement below. The rest of the house remained intact [source: Endeavour].

How could a man catch fire and then burn so completely without igniting everything around him? At first, Bentley's demise was identified as a careless mishap. The elderly gentleman loved to smoke his pipe and he had a habit of carrying matches in his robe pockets. Upon reviewing the scene, the coroner deduced that Bentley had fallen asleep while smoking in the bathroom and was burned alive after some of his clothing caught fire [source: Nickell].

But there's another school of thought. Bentley's case and many others like it have been presented as examples of spontaneous human combustion (SHC). Although he and other alleged victims of the phenomenon burned almost completely, their surroundings were left somewhat unscathed.

So can humans spontaneously burst into flames? A lot of people think spontaneous human combustion is a real occurrence, but most scientists aren't convinced. In this article, we will take a look at this strange debate, see what believers have to say about it and try to separate the scientific truth from the myths.

What Is Spontaneous Human Combustion? 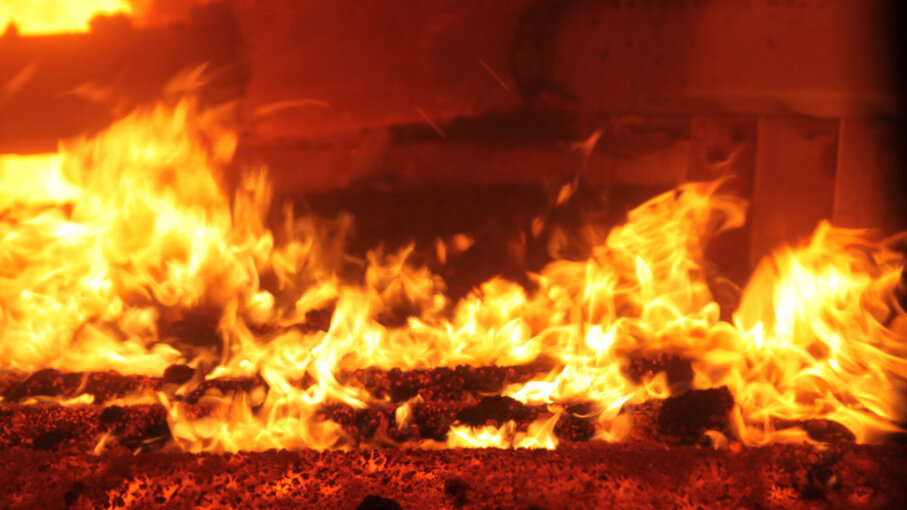 Spontaneous combustion occurs when an object bursts into flames from a chemical reaction within. Douglas Sacha/Getty Images

Spontaneous combustion occurs when an object — in the case of spontaneous human combustion, a person — bursts into flames from a chemical reaction within, apparently without being ignited by an external heat source [source: National Parks Service].

The Danish anatomist Thomas Bartholin has been credited with penning the first written account of spontaneous human combustion. In 1663, he described how a woman in Paris "went up in ashes and smoke" while she was sleeping. The straw mattress on which she slept was unmarred by the fire. In 1673, a Frenchman named Jonas Dupont published a collection of spontaneous combustion cases in his work "De Incendiis Corporis Humani Spontaneis" [source: Reville].

The hundreds of alleged SHC accounts since that time have followed a similar pattern: The victim is almost completely consumed, usually inside his or her home. Coroners at the scene have sometimes noted a sweet, smoky smell in the room where the incident occurred [source: Endeavour].

There's something peculiar about many of the photos that document suspected SHC victims. In a number of these shots, the corpse's torso and head are charred beyond recognition, but some extremities remain intact, with the hands, feet, and/or part of the legs being apparently unburned. Also, the room around the person may show minimal fire damage — though a greasy residue is sometimes left behind on furniture and walls [source: Nickell].

Reports have also been made about spontaneous human combustion victims who didn't simply burst into flames. These individuals are said to have developed strange burns on their bodies with no obvious source. And not every person who supposedly caught fire has died — some people say they've experienced SHC and then lived to tell the tale [source: Lewis]. 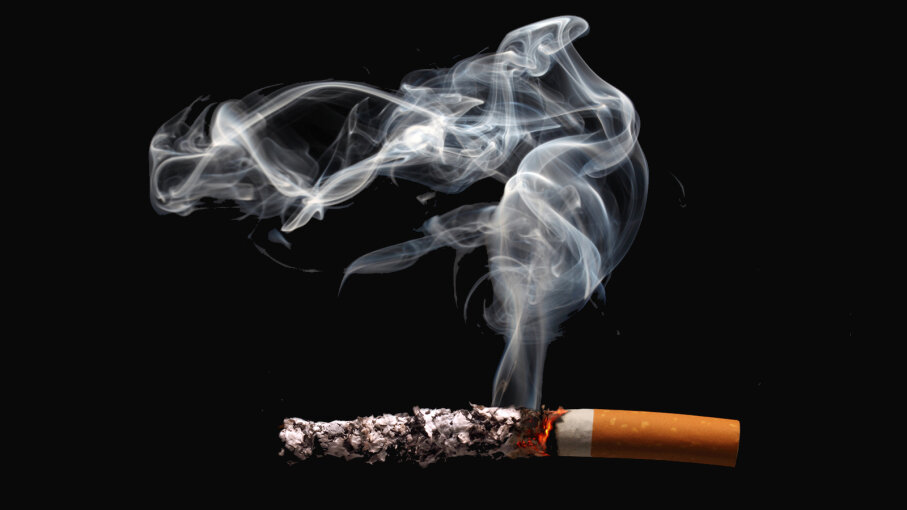 Many of the so-called victims of spontaneous human combustion were known smokers who probably died by falling asleep with a lit cigarette, cigar or pipe. Nicholas Eveleigh/Getty Images

For an object to combust spontaneously, three things need to happen. First, the body must be heated to its ignition temperature — the point at which it will catch fire without being exposed to an external flame or spark. If the heat building up inside the object cannot escape, and if it's being exposed to a steady flow of oxygen that isn't rapid enough to cool it down, the stage will be set for spontaneous ignition [source: South Australian Metropolitan Fire Service].

We know this can happen to certain inanimate objects that will be discussed later. But does the phenomenon occur in humans? The jury is still out. That said, a few explanations for how people could hypothetically experience spontaneous combustion have been forth over the last few centuries.

Charles Dickens blamed booze. In the 1850s, the writer ignited great interest in SHC by using it to kill off a character in his novel "Bleak House." The character, named Krook, was an alcoholic following the belief at the time that spontaneous human combustion was caused by excessive amounts of alcohol in the body. American prohibitionists helped spread this notion as they denounced the evils of alcoholism [source: Behr].

Other ideas are more popular today. One widespread belief says the fire is sparked when methane (a flammable gas produced by gut bacteria) builds up in the intestines and is ignited by enzymes (proteins in the body that act as catalysts to induce and speed up chemical reactions) [source: Reville].

Yet this begs the question of why there are no reported instances of spontaneous combustion in cows, which produce far more methane than people [source: Radford].

It's also been suggested that the fire begins because of static electricity building up inside the body or from an external geomagnetic force. A self-proclaimed expert on spontaneous human combustion, Larry Arnold, has suggested that the phenomenon is the work of a new subatomic particle called a pyroton, which he says interacts with cells to create a mini-explosion. But as of August 2018, there's no scientific evidence that proves the existence of this particle — or spontaneous human combustion itself [source: McCarthy].

If spontaneous human combustion isn't real, then what's the explanation for the stories of people who have seemingly burned from within? And what really occurred in the many pictures that depict the charred bodies of alleged victims?

A possible explanation is the wick effect. When lit by a cigarette, smoldering ember or other heat source, the human body acts much like an inside-out candle. A candle is composed of a wick on the inside surrounded by a wax made of flammable fatty acids. The wax ignites the wick and keeps it burning. In the human body, the body fat acts as the flammable substance, and the victim's clothing or hair acts as the wick. As the fat melts from the heat, it soaks into the clothing and acts as a wax-like substance to keep the wick burning slowly. Scientists say this would explain why victims' bodies are destroyed yet their surroundings are barely burned [source: McCarthy].

Forensic scientist John DeHaan once watched this gruesome spectacle unfold in real time — to a pig, anyway. In a 1998 experiment that was televised on the BBC, he wrapped a pig corpse in a blanket, then lit the garment ablaze with some petrol. As DeHaan looked on, the animal's body fat liquified, adding more fuel to the fire. By the time he put out the flames a few hours later, the slow, intense burn had converted a large percentage of the pig's flesh and bones into ash. (The rest of the room suffered minimal damage.) [source: Kelly].

Yet the dead pig's feet remained intact. This is consistent with reports of SHC leaving disembodied feet or hands behind. Extremities don't contain as much fat as the core of the body does, so they're less likely to go up in smoke when the wick effect occurs.

Now how does science account for the greasy stains left on walls and ceilings after a spontaneous combustion? Those could simply be the residue that was produced when the victims' fatty tissue burned [source: Nickell].

Once again, we must stress that no one has ever conclusively proven (or disproven) the existence of SHC. Most scientists say there are more likely explanations for what happened to those who died in the cases we've discussed. Many so-called victims of SHC were smokers who probably died by falling asleep with a lit cigarette, cigar or pipe. Several them were believed to have been under the influence of alcohol — or suffered from a movement-restricting disorder that prevented them from moving quickly enough to escape the fire [source: Benecke].

The validity of spontaneous human combustion is viewed with skepticism by the scientific community. But some objects have been scientifically proven to burst into flames without an outside heat source. One example is a pile of oily rags stored together in an open container such as a bucket. As oxygen from the air hits the rags, it can slowly raise their internal temperature high enough to ignite the flammable oil. Wet piles of hay or straw have also been known to spontaneously combust. When they decompose, microbes and bacteria living inside them can generate enough heat to kindle a spark [source: Fransen and Zaugg]. 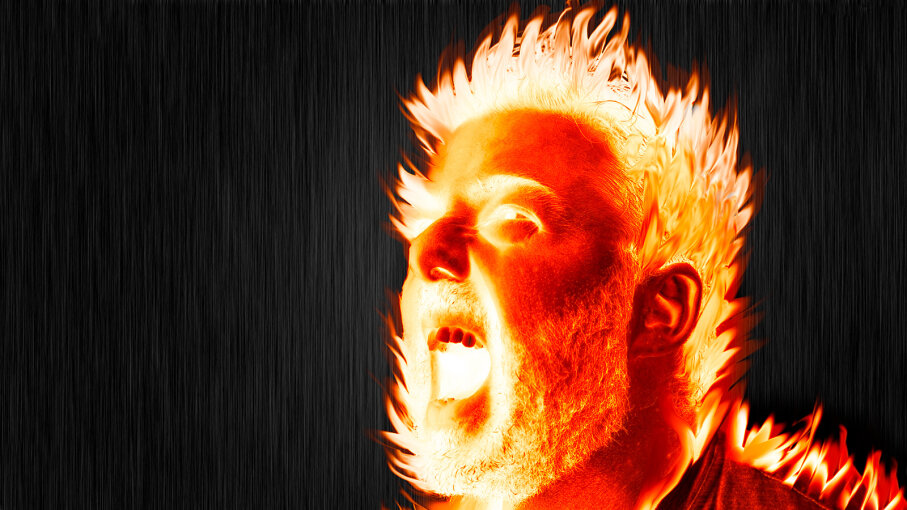 These are just a few of the many hundred reported cases of spontaneous human combustion:

In 1951, a 67-year-old widow named Mary Reeser was at home in St. Petersburg, Florida. On the morning of July 2, her landlady discovered that Reeser's front door handle was hot. When the landlady broke into the apartment with the help of two workmen, they found a slipper-clad foot and what looked like a charred, shrunken skull. No other body parts were present. Those gruesome remains sat in a puddle of grease on the floor where Reeser's easy chair used to be. The rest of her apartment bore very little evidence of fire. Paranormal enthusiasts see Reeser's death as a classic example of spontaneous human combustion. Skeptics point out that the woman was a confirmed smoker who'd taken at least two sleeping tablets that day. Maybe a dropped cigarette — and not SHC — was what sealed her doom [source: Kelly].

In 1982, a mentally handicapped woman named Jean Lucille "Jeannie" Saffin was sitting with her elderly father at their home in Edmonton, in northern London. To her parent's horror, Jeannie's upper body suddenly became enveloped in flames. The stove appeared to be unlit and no smoke or fire damage could be found anywhere else in the room. Even the wooden chair that she was sitting on at the time was spared. Mr. Saffin and his son-in-law, Donald Carroll, managed to put out the blaze, but after a brief hospital stay, Jeannie died of third-degree burns. Did she combust without warning? Believers think so, but some forensics analysts wonder if an ember from her father's pipe ignited poor Jeannie's clothing [source: Nickell].

In 2010, 76-year-old Michael Faherty of Galway, Ireland was found dead on his living room floor. His body was thoroughly crisped, with his head lying beside his open fireplace. The ceiling space immediately above his body showed burn marks, and so did the floor beneath it. Yet nothing else in Faherty's home was torched. News of his tragic death probably wouldn't have spread beyond the local obituaries if coroner Ciaran McLoughlin didn't point to SHC as its cause. "This fire was thoroughly investigated," McLoughlin reported in an official statement, "and I'm left with the conclusion that this fits into the category of spontaneous human combustion, for which there is no adequate explanation." Not everyone is convinced, though: Critics say that an ember from the fireplace could've landed on Faherty's clothing and started a fatal blaze [source: Radford].

To find out more about spontaneous human combustion and related topics, check out the links on the next page.