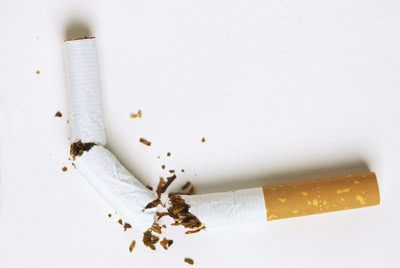 While there are thousands of chemicals in the tobacco plant (not to mention those added by cigarette manufacturers), one, nicotine, produces all the good feelings that draw people back for another cigarette or plug of tobacco.
Dorling Kindersley/Getty Images

You may have discovered the effects of nicotine in your teen years -- as many as 85 percent of adult American smokers admit they got hooked when they were under 21 -- but tobacco has a more substantial history than sneaking a smoke after school [source: American Lung Association].

Nicotiana tabacum was discovered and then cultivated in the Americas as early as 6000 B.C., and ever since, people have been smoking or chewing the leaves of the plant. Tobacco use was controversial even in its early days. It was believed to have medicinal properties -- tobacco was used to protect against the ravages of the bubonic plague in the Middle Ages -- yet as early as the 1600s, there was speculation that there might be a link between certain diseases such as cancer and tobacco use. Since then, modern research methods have provided evidence of this link; and while there are thousands of chemicals in the tobacco plant (and that's not even including those added by cigarette manufacturers), it's one -- nicotine -- that produces the good feelings that keep users coming back for more.

Tobacco is a member of the deadly nightshade (or belladonna) family of flowering plants, a family that also includes potatoes, tomatoes, eggplant, and capiscum pepper plants -- a family rich in alkaloids. About 5 percent (by weight) of the tobacco plant is nicotine (C10H14N2), a naturally occurring liquid alkaloid. An alkaloid is an organic compound made out of carbon, hydrogen, nitrogen and sometimes oxygen, and it can have potent effects on the human body. The morning cup of coffee you enjoy, for instance, contains another type of alkaloid: caffeine. Cigarettes typically contain about 10 milligrams of nicotine (sometimes up to 20 milligrams, depending on the brand); when you smoke a cigarette, about 1 to 2 milligrams get absorbed by your body [source: PBS].

Let's look at what happens when nicotine and your body get together.