What if alcohol didn't exist? 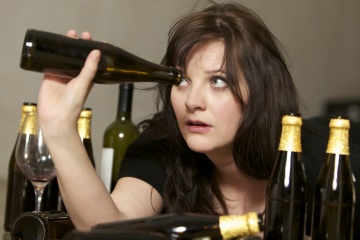 No use checking — all that booze is gone for good. But it's not all bad news: No alcohol means no alcohol-related deaths or violence.
michele princigalli/iStock/Thinkstock

As a species, we drink a staggering amount of alcohol. The total volume consumed by humans annually is enough to supply every living human with 6.2 liters of alcohol every year [source: WHO]. That's pure alcohol, mind you — not beer or wine or even whiskey, but the kind you should really only drink if you want to get your stomach pumped. Add the fact that 61.7 percent of the world abstains from alcohol, and the share for drinkers rises to 16.3 liters. We're going to need some mixers.

All that alcohol going into our bodies absolutely has an effect on human behavior. In 2012, 5.9 percent of all global deaths were attributed to alcohol consumption — that's 3.3 million people dead of alcohol-related health problems, alcohol-related violence and drunken driving [source: WHO]. In the United States alone, 10,076 people died in alcohol-related car accidents in 2013 [source: DOT]. If all alcohol disappeared tomorrow, there definitely would be a global drop in deaths and violence.

On the other hand, a complete lack of alcohol probably wouldn't solve all of our substance-abuse problems. The desire to enter altered states of consciousness is universal — people in every culture in the history of the world have used some kind of mind-altering substance, alcoholic or otherwise [source: SIRC]. For some cultures that means ayahuasca (a hallucinogenic beverage made from the bark of a woody vine), cannabis or certain kinds of mushrooms. But the drive for an alternative to day-to-day realities that provides psychological release as well as social bonding never goes away. Saudi Arabia, for instance, bans alcohol but is suffering from a drug crisis — in 2014, 30 percent of all amphetamine seizures by police took place in Saudi Arabia [source: Sloan]. And Iran, which has banned alcohol since the Islamic Revolution in 1979, estimates that 2 million citizens, or 2.6 percent of the total population, are addicted to hard drugs [source: Economist].

So let's take a different tack and ask what would have happened if alcohol had never existed in the first place, at least not in a form that humans consider interesting. To do that, we have to go back a long way in human history. Far enough back that it was before we were even humans. We're talking millions of years.

At some point, one of our monkeylike ancestors developed a mutation that made it fun to eat rotten fruit off the forest floor. As yeast bacteria break down the sugars in fruit, it produces alcohol. Most animals can't metabolize alcohol very well, but many primates can. Animals that could derive extra nutrition from alcohol had an advantage of a new, rich calorie source. The disadvantage was, naturally, having to eat rotten fruit.

Most rotting fruit doesn't have enough alcohol to get you drunk, even if you're monkey-size, but at some point our ancestors began to associate a pleasurable sensation with it. Maybe one found a big pile of very rotten fruit one day and rather than moving along to find something else to eat (say, unrotten fruit), it decided to go for broke and eat the whole thing. And that made it feel pretty great. Back at camp, it started telling everybody, "You guys! You have got to try this rotting fruit! I know, I know, it's rotting fruit, but check this out. It gets you drunk! Which is a new word I made up for this feeling. I have to go lie down for a second." Thus human alcohol consumption was born.

So what would have happened if our eccentric ancestors hadn't figured out that naturally fermented fruit could get you buzzed? We might have started fermenting our own grain anyway. While the oldest direct evidence of alcohol comes from China between 7000 and 6600 B.C., flour and mixtures of plant residue at the Wadi Kubbaniya archaeological site in Egypt suggest that brewing might have been taking place as early as 18,000 years ago [source: Tucker]. That's really about as long as we've been doing anything else that we think of as human. For comparison, humans started settling down, building permanent houses and tending crops about 12,000 years ago. We may have been making alcohol longer than we've been sleeping indoors.

It's also quite a coincidence that we started growing grain and tending gardens at right about the same time that we started brewing beer. So much of a coincidence, in fact, that some anthropologists think it wasn't a coincidence at all — some prehistoric societies may have settled down for the express purpose of making beer as a way to harness the calories in grains. Tough little seeds from cereal crops aren't useful unless they're processed first. But many of the grains found in Fertile Crescent archaeological sites, such as barley, were poorly suited for bread because of the time-consuming and difficult process of husking and grinding. Beer, on the other hand, was rich in calories, less labor intensive than flour and a safe source of drinking water.

Does that mean early humans spent their lives in a semipermanent state of being hammered? Probably not. Early beers didn't have alcohol content near that of our modern beverages. They were only mild intoxicants, with an alcohol content closer to 3 percent, and the partially fermented mash that was a byproduct of the brewing process made nutritious meals [source: Aines]. The more technologically involved process of baking bread probably came later.

Without alcohol, maybe we'd still be huddled around campfires arguing about which mushrooms were poisonous and how to avoid being eaten by wolves. Alcohol helped make us what we are, providing clear nutritional benefits and helping to drive the development of agriculture. For something that makes so many of us behave like Neanderthals, alcohol has played a major role in civilization.

What Is a 'Smocking Gun'?
What if Earth's core cooled down?
What if you drank embalming fluid?