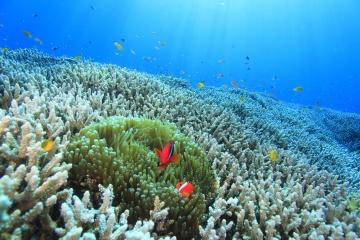 What would happen if all the coral reefs disappeared? The outlook is pretty grim.
© Kyu Furumi/Aflo/Corbis

The beautiful turquoise waters of the Caribbean, the South Pacific and other oceans have become popular travel destinations for scuba divers and snorkelers partly because of the variety of fish drawn to the coral reefs in these areas.

So what is coral? A living creature, coral can be hard or soft. The coral reefs that we see in the oceans are formed by colonies of little critters called coral polyps, distant relatives of sea anemones and jellyfish. Hard coral is made when coral polyps extract calcium from seawater and turn it into external limestone shelters. Other coral polyps convert the calcium into internal skeletons and create soft corals. And when many colonies of coral polyps get together and create a larger home, we call it a coral reef [source: Teach].

Not only do coral reefs draw snorkelers and divers, but they also support the highest marine biodiversity in the world. While they cover less than 1 percent — and falling — of the Earth's surface, coral reefs are vital to more than 500 million people who depend on them for food, jobs and recreation — with an estimated economic impact of $375 billion a year [source: IUCN Coral].

This what-if question is not some farfetched scenario. The threats to coral and coral reefs — which include climate change, pollution, coastal development, fishing and the creation of jewelry and souvenirs — are very real. In fact, live, growing coral on Caribbean reefs has declined to just 8 percent of the reefs' composition, compared with more than 50 percent in the 1970s [source: IUCN Facts].

So what happens if the coral reefs vanish completely? Some experts predict hunger, poverty and political instability as the livelihoods of the peoples of entire countries disappear. Once the coral is dead, the reefs will also die and erode, destroying important marine life spawning and feeding grounds. Animals that rely on coral for protection and cover, such as grouper, snapper, oysters and clams, would also be negatively impacted. And because this marine life is a vital staple in many peoples' diets, the death of the coral reefs would exacerbate the problem of feeding these groups [source: Skoloff].

The ocean fishing industry, which employs 38 million people worldwide, would collapse. Caribbean island nations that depend on tourism dollars would see those disappear. Finally, the health of people around the world, not just in coral reef areas, would suffer, since coral is used in many medicines [source: Skoloff].

And these are just the results that scientists can predict with near certainty — though many point out they can't predict everything that might happen if the coral reefs disappear. The disruption to the food chain and biodiversity of the oceans could lead to additional problems that we can't begin to fathom.

There are actions we can take to help maintain coral reefs. Many offer other benefits to the environment, such as using alternative means of transportation like walking or biking, which decreases the use of pollutants like oil and gas; volunteering with beach and reef cleanup organizations; and reducing the use of pesticides and fertilizers that can end up in oceans [source: Bardroff]. So with a little awareness and a commitment to conscientious choices, you can help keep coral — and the biodiversity coral nurtures — around for the next generations to enjoy.

What Are Skyquakes?
How the Hum Works
Why Do We Have Leap Years?