What if you eat marijuana? 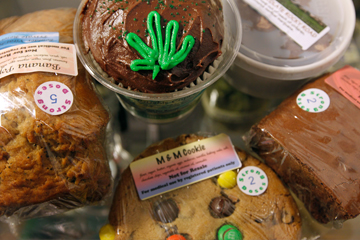 Places like Colorado have many THC-laced edibles for sale.
© Erich Schlegel/Corbis

In 2014, when New York Times columnist Maureen Dowd ventured to Colorado, legally purchased a marijuana-infused candy bar and ate way too much of it, she spent eight sleepless hours believing she was dead [source: Dowd]. After writing a column documenting her nightmarish experience, a billboard appeared in Denver, offering sage advice: "Don't let a candy bar ruin your vacation. With edibles, start low and go slow" [source: Wallis].

While smoking is the prevailing means of consuming marijuana -- the most commonly used illegal drug in the country -- eating marijuana is a popular alternative [source: National Institute on Drug Abuse]. Typically, "eating marijuana" doesn't mean chowing down on cannabis plants in their raw form. Instead, it means eating baked goods, candies, ice cream, salsa or another food fortified with the drug's constituent chemicals -- in particular, tetrahydrocannabinol, or THC, its main psychoactive ingredient. These chemicals can produce a range of effects, including euphoria, relaxation, increased appetite, impaired motor skills, short-term memory loss, dry eyes and mouth, and anxiety. If you're among the two in five Americans who have used marijuana at least once in their lifetime, you probably have some idea what that feels like [source: MedlinePlus].

But there are a few key differences between smoking marijuana and eating it, starting with how quickly you begin feeling high. The effects come on more or less immediately after smoking marijuana and disappear within three hours. Meanwhile, with ingestion, the effects can take anywhere from 30 minutes to three hours to kick in, and they can linger for six to 10 hours (an advantage for medical marijuana users who want to minimize the frequency of dosage).

Additionally, digestion alters THC in ways that inhaling it does not. Your liver metabolizes delta-9-tetrahydrocannabinol into 11-hydroxy-tetrahydrocannabinol -- a THC variant with more psychedelic properties -- before it reaches your stomach [source: Wishnia]. As a result, getting high on ingested marijuana can seem stronger than its puffed counterpart.

What you feel after eating a pot brownie all depends on how much you ate, your tolerance and its potency. If your friend with the lava lamp collection baked the brownie, it might be hard to know how strong it is. But if you bought it legally, odds are you can look on the label: Colorado state law, for example, requires disclosure of the amount of THC and other chemicals in edible marijuana products. A standard serving size is 10 milligrams (.00035274 ounces), while first-timers are recommended to start with 5 milligrams (.00017637 ounces) [source: Marijuana Policy Project].

If you ignore these limits and eat too much -- or if your friend with the lava lamps got a little too enthusiastic in the kitchen -- the good news is you won't die from overconsumption of marijuana. However, as Dowd's experience shows, you could be in for a long, paranoid night, and you might even hallucinate. The indirect consequences could be deadly: In 2014, a college student visiting Denver ate a pot cookie with 65 milligrams (.00229281 ounces) of THC, then jumped over a balcony and to his death [source: Nicholson].