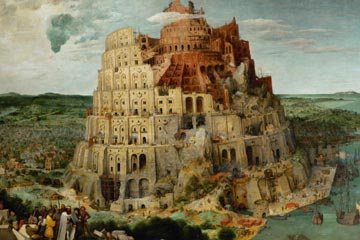 A 16th-century painting of the Tower of Babel by Pieter Bruegel the Elder. This is where the word "babble" comes from.
Imagno/Getty Images

There was a time long ago when everyone on Earth spoke the same language, according to Judeo-Christian scripture. People decided to build a massive tower to heaven to make a name for themselves. Known as the Tower of Babel, this undertaking did not sit well with God:

And the Lord said, "If as one people all sharing a common language they have begun to do this, then nothing they plan to do will be beyond them. Come, let's go down and confuse their language so they won't be able to understand each other" [source: Net Bible].

Clearly, God was in a bad mood that day.

Whether the story of the Tower of Babel represents religious symbolism or actual human history is a question for the scholars. There is no concrete evidence of a single mother tongue spoken by ancient humans, though many experts cite the similarities among the world's oldest languages, including Greek, Latin, and Sanskrit, as evidence that modern languages share a common source [source: PBS] . According to Dr. Noam Chomsky, professor of linguistics at the Massachusetts Institute of Technology, "Every language that has ever existed is just a modification of something before it."

While we don't know exactly where each of the world's languages came from, we do know that the world's people have not spoken the same language at any point in recent history.

It's difficult for linguists to know how many languages exist in the world at any given time, mainly because the point at which a dialect becomes a separate language is hard to pin down [source: Palomar]. Best estimates put the current total at 6,909 distinct languages [source: Ethnologue].

Despite the difficulties of counting languages, most experts agree on one thing: There are fewer languages around today than yesterday. That's because languages are disappearing at an alarming rate – some experts predict that half of the current languages will be gone by the year 2100 [source: Pearson and National Geographic]. To put that figure into historical perspective, there may have been upwards of 12,000 distinct languages in the world 10,000 years ago when the world's population was 5 to 10 million [source: CLTA-GNY]. So what's the future of language?

Can a Planetary Parlance Co-exist with Mother Tongues? 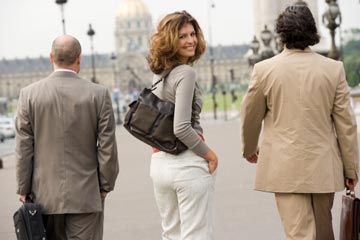 Being able to communicate with people from all over the world would open up huge opportunities for work, study, and relationships.
Christopher Robbins/Thinkstock

Language is just one piece of the wonderfully complex puzzle that is humanity. That's why foreign language instruction is often accompanied by an appreciation for the music, food, and way of life of a particular place. These things provide insight into a people's beliefs, priorities, and common history. The result is often a greater understanding of the people whose language is being studied.

Imagine losing the languages of the world to a dominant global one. According to Dan Fitzgerald, a Washington, D.C.-based French instructor, the costs to humanity would be huge. "Much of the culture that goes along with each of those languages would also disappear," he explains.

Next, imagine a world in which most people could speak a global language, but still had their native language as a primary form of communication. Being able to communicate with people from all over the world would open up huge opportunities for work, study, and relationships that would otherwise be extremely difficult.

The notion of a common global language, of course, raises the question of which language we would use. Most experts agree that the answer depends largely on practical factors that could shift with changes in political and economic power over time. That's because language acquisition is almost always driven by necessity – there simply has to be a good reason for people to bother to learn a new one.

Esperanto is a language that was created in 1887 specifically to be a common second language [source: Esperanto USA]. However, with only 2 million speakers worldwide, it seems unlikely to become a viable form of global communication. According to Dr. Matt Pearson, associate professor of linguistics at Reed College in Portland, Ore., this is probably because Esperanto was never the language of a politically or economically dominant nation or group.

Some might say that we already have a world language: English. English is spoken in more than 100 countries, making it by far the most global language on earth. There are certainly other languages that are spoken by more of the world's people, such as Mandarin Chinese and Hindi. However, Mandarin Chinese and Hindi are spoken in only 16 and 17 countries, respectively [source: Palomar College].

English may well be the language of global communication at the moment, but it can certainly be displaced at any time due to shifting global demographics and priorities. However, one thing is unlikely to change: People will always cling to their native language, whether or not it confers some competitive advantage. That's because language is more than just a method of communication. It's a link to our personal identity, and that's much too important to lose.

In writing this piece, I had the pleasure of speaking with many linguistic experts, language instructors and multilingual people from all over the world. Their insight was invaluable, not only for their expertise, but also because I gained a deeper understanding of the value of language. Not only does it connect us with our own personal histories, it has enormous potential to shape our futures. For me, learning Spanish was never easy, but I enjoyed doing it. Never in my wildest dreams did I consider that it would lead me to my husband.

Considering the inseparable link between language and identity, it seems unlikely that people will ever voluntarily give up their native languages. On the other hand, given the ease with which children can learn other languages -– combined with the increasingly global nature of our society -– it seems likely that the world will remain marvelously multilingual for years to come.

What's the Difference Between Sasquatch and Bigfoot?
What if there were no snakes?
If you sneeze with your eyes open, will your eyes pop out of your skull?