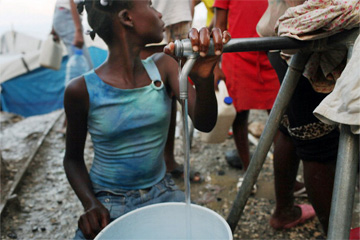 Back in 2000, the United Nations committed to halving the percentage of people without access to clean water and sanitation before the year 2015. A decade later, the U.N. General Assembly ruled that access to both of those things are human rights. Unfortunately, that's not the case for a whopping 894 million people -- or one out of every six people on the planet [source: UN Water]. While the U.N.'s progress toward healthily hydrating the world is promising, hundreds of millions of people won't have clean water for the foreseeable future. What if, somehow, everyone did?

Most significantly, humanity would get a lot healthier. The number of people dying from diarrheal diseases -- some of the world's leading killers -- would fall by 88 percent if sanitation improved as well, saving more than 2 million lives every year [sources: UN Water, WHO]. Instances of other waterborne sicknesses like river blindness and cholera also would plummet. Still others, such as guinea worm disease and arsenicosis (caused by arsenic-contaminated drinking water), could disappear entirely. All told, access to clean drinking water would prevent 3 million deaths and millions more cases of debilitating illness [source: WHO].

Along with globally improved health, our what-if world would also realize substantial economic benefits. Even in the United States, where people take the vital liquid for granted, waterborne diseases cost the country an estimated $500 million every year in medical costs and lost productivity [source: CDC]. In impoverished nations, where far fewer people can claim that right, those costs rise even higher. For example, more than half of all hospital beds in sub-Saharan Africa are occupied by patients suffering from waterborne illness, causing an incredible burden on both those hospitals and the patients' families. Waterborne illness also prevents patients from working, increasing the societal toll. No wonder the World Health Organization estimates investments in clean water and sanitation initiatives produce economic returns ranging from $3 to $36 [source: Water.org].

While the health and economic gains associated with global access to clean water would become immediately apparent, there would also be a number of long-term consequences. If everyone had access to clean water and, thus, longer life spans, we could initially expect populations and overall welfare to rise. Whether that growing population would coincide with a country's development or outpace it is hard to say. With an abundance of clean water, we could also avoid what the U.N. fears are inevitable water wars centered in areas of Africa where the resource is scarce [sources: UPI, BBC].

It's hard to know exactly what the world would be like if everyone had access to clean water; change on such a large scale would inevitably produce unforeseen consequences. We do know, however, that clean water is fundamental to development, and without it, millions of people will never have the chance to realize their potential.