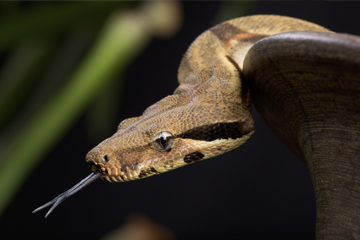 Snakes can be pretty creepy, but they tend to stay out of your house more than the mice they eat.
Jeff McGraw/ThinkStock

The allegedly fearless (and fictional) adventurer Indiana Jones shares a fear common to many people: "Snakes. Why did it have to be snakes?" he asks when he first peers into the chamber holding the titular Ark of the Covenant in "Raiders of the Lost Ark." Fear of snakes is so common that it has its own name: ophidiophobia. Many people probably wish that snakes would disappear, perhaps by being driven out of existence the way legend says St. Patrick drove them out of Ireland.

Of course, St. Patrick's role in ridding the Emerald Isle of snakes is a myth. But there are several other snakeless places around the world besides Ireland — New Zealand, Antarctica, Iceland and Greenland, for instance — and life goes on just fine [source: Owen]. So why shouldn't we just wipe the vipers out everywhere? Well, the truth is that getting rid of all the snakes would open the doors to a host of other problems.

First, cases of musophobia — the fear of mice and rats — would ramp up considerably. We're all part of the food chain — that great circle of life that tries to keep things in balance. Think about what snakes snack on: primarily mice and rats. You may be terrified of snakes, but imagine for a moment a world overrun by rodents. A single pair of rats can have a million descendants in just a year and a half [source: Smith].

It's thought that the bubonic plague — or Black Death — of medieval times originated in China, where rodents and their plague-laden fleas infected travelers along prominent trade routes to Europe. Because many believed that cats and dogs — which also prey on rats and mice — were spreading the Black Death, many were killed, causing the rodent population to grow. Driving out all the snakes could contribute to a similar problem, especially considering that the bubonic plague was never completely eradicated. In fact, the plague has been seen in modern times, killing a number of people in Madagascar in 2008 — though, admittedly, nobody blamed that outbreak on a dearth of snakes [source: CDC].

In the next link of our food chain, snakes are also prey for some animals we generally like having around, such as all species of cats, coyotes, mongooses and even other snakes. A big snake-sized break in the food chain could negatively impact a variety of other animals [source: Smith].

Most important to humans is the role of venom produced by snakes, as well as other venomous creatures, in the development of medicines. Diabetes and heart disease medicines have been derived from snake venom, which is also being used to develop treatments for autoimmune diseases, cancer and pain [source: Holland]. Makes snakes seem almost cuddly, doesn't it?

So all things considered, the next time you wonder, like Indiana Jones, why it had to be snakes, stop a moment and consider the possible alternatives.