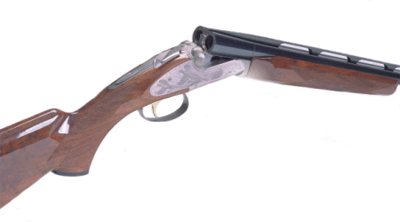 Break-action shotguns are the most straightforward and the safest, and they're commonly used in shooting competitions. The gun has a hinged opening where the chamber meets the barrel. By opening the gun, it is easy to see if it's loaded or not.

To load a new cartridge, the shooter breaks open the barrel on its hinge, physically places a cartridge into the chamber and then closes it. In older model shotguns, the shooter would have to manually cock the hammer and pull the trigger. In most modern shotguns, there's no need to cock the hammer before pulling the trigger. In most cases after firing the gun, the shooter then manually removes spent cartridges from the chamber and repeats the process to fire again. There are both single-barrel and double-barrel shotguns that are break-action. On modern double-barrel shotguns, there's only one trigger and an automatic or manual barrel selector (the selector picks which barrel fires).

Bolt-action shotguns are not all that common, but they work just like bolt-action rifles. The bolt is a rod attached to a spring, and there's a handle sticking out of it. To load a bolt-action, the shooter twists the bolt handle up and then pulls it back. This both exposes the chamber and cocks the firing mechanism. The shooter then loads a magazine into the chamber and pulls the bolt forward into place. This strips the top cartridge from the magazine, blocks it off from the magazine and prepares it for firing. After firing the first shot, each time the shooter pulls the action back and then forward it ejects the spent cartridge, strips the next cartridge from the magazine and prepares it for firing.

Pump-action shotguns also have a moving bolt; but instead of a handle, their bolt system is operated by a wooden or composite slide called the fore-end. In this case, the magazine is a shorter tube under the barrel. First, the shooter fills the magazine with three or more cartridges. There's tension in the magazine from a spring, It's a bit like putting D-cell batteries into an old flashlight. He or she then pulls the fore-end to the rear of the gun. This ejects anything that's in the chamber, cocks the hammer, and loads a shell in the chamber. Next, the shooter pushes the slide forward, which pushes the block and firing pin into the firing position against the cartridge. After each fired shot, the shooter repeats this motion to reload the gun and eject used cartridges.

An experienced shooter can repeat the motion of firing and then pumping to reload very quickly. And because the action is all mechanical and linear, it's very simple and unlikely to fail in action.