How Space Wars Will Work

Browse the article How Space Wars Will Work

At least in nuclear terms, the world is now a much more complex place than it was during the Cold War, when the United States and the Soviet Union, now Russia, were the only two countries possessing nuclear weapons. Today, many other nations may have the ability to launch long-range nuclear missiles.

In order to combat a potential nuclear attack, the United States has been developing a space-based missile defense system for the past two decades. This defense system began under former U.S. President Ronald Reagan. His Strategic Defense Initiative (SDI) called for the development of laser weaponry that would orbit the earth to shoot down ballistic missiles. There is now even talk of the United States developing a fifth military branch, perhaps called Space Force, that would pick up where the Air Force leaves off.

In this edition of How Stuff Will Work, we will look at how some wars are already being fought via satellite, and the technologies that are being developed to fight wars in space!

Preceding World War I, it was almost a necessity for armies to secure the high ground, by overpowering their opponent atop a hill, in order to win battles. Getting to a higher location gave the army on top of the hill the advantage of shooting down on the opposing army, which had to advance up a hill with bullets raining down on it. Historically, armies with the high ground advantage have won more often than not.

The new high ground is space. The U.S. currently uses space in a passive way during combat, so let's look at space from this angle first.

In 1991, the United States and its allies used sophisticated satellite technology to pinpoint Iraqi targets during the Persian Gulf War. Intelligence-gathering satellites gave the American forces an unprecedented view of the battleground, showing every move that the Iraqi armies were making during the war. With the vast expanse of the desert landscape providing visibility, satellite imagery became the main source of information on the Iraqi army during the war.

Satellites also were a valuable tool in deploying troops during the Persian Gulf War. A constellation of satellites orbiting Earth, known as the Global Positioning System (GPS), was used by soldiers on the ground to determine their bearings. These 24 satellites gave the longitude, latitude and altitude of the U.S. soldiers carrying handheld GPS receivers on the battlefield. The open desert was an ideal location for using the GPS satellites, because there were very few natural objects around to interfere with the satellites' signals. In combination with the imagery from the spy satellites that were tracking enemy troops, the GPS gave the United States and its allies the advantage of knowing exactly where to position their troops for the greatest benefit.

The next frontier in space is much more active -- satellite weapons systems designed to shoot down nuclear missiles.

In May 1983, Reagan proposed his Strategic Defense Initiative (SDI), now termed Ballistic Missile Defense, which called for laser-equipped satellites to shoot down intercontinental ballistic missiles (ICBM). ICBMs have a range of more than 6,000 miles (10,000 km). At that distance, an ICBM fired from North Korea could easily reach Honolulu or Los Angeles. Reagan's SDI, also known as "Star Wars," was designed to provide an umbrella of protection from such missile attacks. The SDI satellites would track a missile from liftoff, and shoot it down with lasers before the missile cleared the air space of the country from which it was launched. Work on a space-based laser for Ballistic Missile Defense is proceeding despite some international criticism. The project has continued to receive $4 billion per year, and recently had an extra $6.6 billion budgeted for the project through the year 2005. 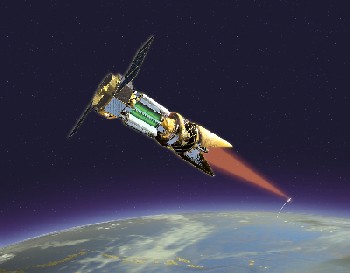 Artist rendering of how a TRW designed space laser-equipped satellite might fire a laser at a ballistic missile from long range.
Photo courtesy TRW

The former U.S. Space Command, which is now part of the U.S. Strategic Command as of June 2002, doesn't hide the fact that it wants to establish U.S. supremacy in space. In its Vision for 2020 report, the Space Command points out that military forces have always evolved to protect national interests, both military and economic. The report suggests that space weapons must be developed to protect U.S. satellites, and other space vehicles, as other countries develop the ability to launch spacecraft into space. In 1997, Assistant Secretary of the Air Force for Space, Keith R. Hall, said, "With regard to space dominance, we have it, we like it and we're going to keep it."

There are at least three laser systems being developed for either space-based or ground-based weapons. All three are a type of chemical laser that involves the mixing of chemicals inside the weapon to create a laser beam. While a space-based laser system is still about 20 years from being realized, there are three lasers being considered for it, including hydrogen fluoride (HF), deuterium fluoride (DF) and chemical oxygen iodine (COIL).

In a 1998 report titled Laser Weapons in Space: A Critical Assessment (PDF file), Lt. Col. William H. Possel of the U.S. Air Force compared the workings of the hydrogen fluoride laser system to the way a rocket engine works. Atomic fluorine reacts with molecular hydrogen to produce excited hydrogen fluoride molecules. This reaction creates a wavelength between 2.7 and 2.9 microns. At that wavelength, the hydrogen fluoride laser beam would be soaked up by the Earth's atmosphere, meaning that it is most likely to be used in space-to-space combat as part of the Space-Based Laser program. The Ballistic Missile Defense Organization has already demonstrated a hydrogen fluoride laser with megawatt power in a simulated space environment.

Another laser, similar to the hydrogen fluoride system, is the deuterium fluoride laser system. Instead of using molecular hydrogen, deuterium is used to react with atomic fluoride. Because deuterium atoms have more mass than hydrogen atoms, this laser has a longer wavelength, about 3.5 microns, and can transmit better through the atmosphere. In 1980, TRW demonstrated a deuterium fluoride laser, called the Mid-Infrared Advanced Chemical Laser (MIRACL), that can produce more than one megawatt of power. This type of laser system was used in tests to shoot down a rocket at the White Sands Missile Range in 1996.

The third type of chemical laser that might be used in ballistic missile defense is the chemical oxygen iodine laser (COIL), which made its debut in 1978. In this laser system, a reaction generated between chlorine and hydrogen peroxide excites oxygen atoms, which transfer their energy to iodine atoms. This transfer of energy causes the iodine atoms to become excited, creating a laser with a wavelength of about 1.3 microns, smaller than either of the two previously mentioned lasers. This smaller wavelength means that smaller optics could be used to develop a space-based lasing system. In 1996, TRW tested a COIL laser that produced a beam with hundreds of kilowatts of power that lasted several seconds. Right now, this is the most promising of the spaced-based lasers in development.

One of the problems with space-based lasers is that they would have to be fixed to a moving satellite as they tried to hit another moving object moving at thousands of miles per hour. Imagine trying to shoot a bird from aboard a supersonic jet. The laser and the object it is trying to hit will likely be traveling at different speeds, making it an almost impossible shot. This is why the U.S. Department of Defense is also considering a particle beam weapon, which would be able to fire beams of subatomic particles, at near the speed of light, at a military target. If a beam could be fired at those speeds, it would, for all intents and purposes, freeze the targeted object.

A particle beam weapon would be able to generate power many times more destructive than any laser in development. Such a weapon would essentially be composed of two parts: a power source and an accelerating tunnel. If a functional particle beam weapon could be built, it would use its power source to accelerate electrons, protons or hydrogen atoms through the tunnel, which would focus these charged particles into a beam that would be fired at the target.

The "bolts" of energy fired from the particle beam weapon would enter into the target's materials, passing the energy onto the atoms that compose the target. This impact would be like a cue ball striking a racked group of billiard balls on a pool table. The rapid increase in the target object's temperature would cause the object to explode in a matter of seconds following impact.

The major obstacle in developing a functional particle beam weapon has been creating a power source that is light enough to put into space, but that can produce millions of electron volts of power and tens of megawatts of beam power. A conventional power station would be able to meet those power demands, but it is far too large to put into orbit. So far, scientists have not been able to develop a suitable lightweight power source that can meet those power demands.

The X-33 space plane may be used for military combat in space.
Photo courtesy NASA

Currently, there are many international agreements that have prohibited the deployment of such weapons into space. One such agreement is the Outer Space Treaty of 1967, which covers outer space, the Moon, and other celestial bodies. The one loop hole in this treaty is that it doesn't say anything about the area just above Earth, where most satellites are in orbit. However, the treaty does prohibit placing nuclear weapons, or other weapons of mass destruction, into Earth's orbit. But the question is, are lasers and particle beams weapons of mass destruction? The treaty further prohibits the construction of military bases and fortifications on any celestial body, including the Moon.

In November, 1999, 138 United Nations members voted to reaffirm the Outer Space Treaty. Only the United States and Israel abstained from the vote. Based on that vote, which upheld the ban on weapons in space, it would seem that space weapons will remain grounded for the time being. So, for now, thoughts of Death Star-like weapons and X-Wing fighters, battling it out thousands of miles into space, will have to be put on hold.