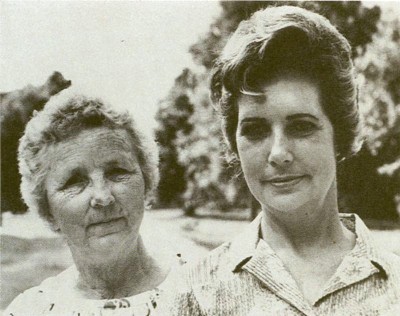 A UFO sighting on the evening of December 29, 1980, changed the lives of three Texans forever -- and not for the good.

While driving through the southern tip of the east Texas piney woods, north of Houston, Betty Cash, Vickie Landrum, and Vickie's seven-year-old grandson Colby came upon a huge diamond-shaped object just above the trees and 130 feet away. Cash hit the brakes, and she and the elder Landrum stepped outside. Immediately, they noticed intense heat. Their faces felt as if they were burning. When Vickie reentered the car and touched the dashboard to steady herself, she left a handprint.

Among other symptoms, Vickie Landrum and Betty Cash suffered festering body sores. The UFO sighting has had a permanent effect on their health.
Intercontinental U.F.O. Galactic Spacecraft Research and Analytic Network Archives

Blasting fire and heat, the UFO slowly ascended. Suddenly, numerous helicopters -- 23 in all -- appeared from all directions, positioning themselves near the strange craft. By this time the witnesses were back in the car and watching the spectacle from their moving vehicle. (Other motorists saw the object and the helicopters from different, more distant locations.) Eventually, the flying objects were lost to view. Unfortunately, the episode was only beginning.

Back home the three fell sick, Cash most severely. She suffered blisters, nausea, headaches, diarrhea, loss of hair, and reddening of the eyes. On January 3, unable to walk and nearly unconscious, she was admitted to a Houston hospital. Vickie and Colby were experiencing the same symptoms, though less severely.

The witnesses' health problems continue to this day. In September 1991 Cash's personal physician, Dr. Brian McClelland, told the Houston Post that her condition was a "textbook case" of radiation poisoning, comparable to being "three to five miles from the epicenter of Hiroshima." For years the three have pursued their case through the courts, seeking answers and redress, but official agencies deny any knowledge of the incident-even though the helicopters have been identified as twin-rotor Boeing CH-47 Chinooks, used by both the Army and the Marines.

The Truth Behind the Rogue Planet Nibiru
Two for Teegarden: Pint-sized Star System Discovered Right Next Door
New Kaleidoscopic Map Details the Geology of the Moon