John Lear and the Dark Side 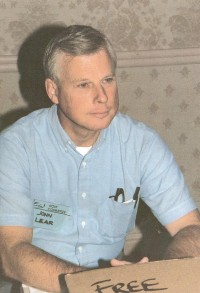 In recent years new and even wilder strains of paranoia have sprouted along ufology's fringes. Inspiration comes not just from UFO rumors but from conspiracy theories associated with the far right end of the political spectrum. The two major figures in what has been called the "dark side movement" are John Lear, a pilot who once flew aircraft for a CIA-linked company, and Milton William Cooper, a retired Navy petty officer.

According to dark siders, a ruthless "secret government" controls the world. Among other nefarious activities, it runs the international drug trade and has unleashed AIDS and other deadly diseases as population-reducing measures. Its ultimate goal is to turn the Earth and surrounding planets into slave-labor camps. For some time this secret government has been in contact with alien races, allowing the aliens to abduct human beings in exchange for advanced alien technology.

The aliens, known as the "grays" (because of their gray skin color), do more than abduct human beings. They mutilate and eat them as well, using the body parts to rejuvenate themselves. The secret government and the aliens labor together in vast underground bases in New Mexico and Nevada, where they collect human and animal organs, drop them into a chemical soup, and manufacture soulless android creatures. These androids, who are then unleashed to do dirty work for the government/alien conspiracy, are best known to the rest of us as the men in black.With each retelling, with the appearance of each new and expensive book, video, or tape, the dark-side story gets crazier.

In one version the conspirators travel into the future to observe the emergence of the anti-Christ in the 1990s, World War III in 1999, and the Second Coming of Christ in 2011. George Bush oversees the world's drug traffic. The secret government has maintained bases on Mars since the early 1960s. The conspirators employ drugs and hypnosis to turn mentally unstable individuals into mass murderers of schoolchildren and other innocents; the purpose is to spur anti-gun sentiment, resulting in gun-control legislation. Thus, Americans will be disarmed and defenseless when the secret government's storm troopers round them up and herd them into concentration camps.

A small army of fervent believers all around the world has embraced these monstrous yarns, for which-no rational reader will be surprised to learn-not a shred of supporting evidence exists. The true sources of these lurid tales are not hard to find: They are a hodgepodge of elements patched together from saucer folklore, extremist political literature, and a 1977 British mock-documentary, Alternative 3. The purpose of this show was to satirize popular credulity and paranoia. Unfortunately, some remain convinced the show was sober fact, ironically serving only to give rise to fresh varieties of mass gullibility and fear.