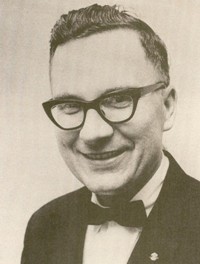 The central figure in a UFO legend, Albert Bender supposedly was silenced by menacing men in black because he had discovered the answer to the UFO mystery.
Fortean Picture Library

While contactees offer a rosy picture of the UFO phenomenon, other, darker visions have obsessed some saucer enthusiasts. In fact, even contactees agree that all is not well. Sinister forces oppose the Space Brothers' benevolent mission. Some of these are extraterrestrial and others terrestrial, and they work together to thwart the emergence of the truth.

Among the early victims of this evil "Silence Group" was Albert K. Bender of Bridgeport, Connecticut. In 1952 Bender formed the International Flying Saucer Bureau (IFSB), which met with immediate success, but he shut it down the next year under mysterious circumstances. In due course Bender confided that three men in black had imparted to him the terrifying answer to the UFO mystery and turned his life into a nightmare. He would say no more. Three years later an IFSB associate, Gray Barker, wrote a book about the episode; the title perfectly captured the paranoia abroad in UFO-land: They Knew Too Much About Flying Saucers.

Through the "Bender mystery" the legend of the "men in black" (MIB) came into the world-even though, as Barker observed, a man in black had played a villainous role in the Maury Island incident. According to Barker, the MIB were ranging as far afield as Australia and New Zealand, scaring still more UFO buffs into silence.

By the late 1980s MIB tales had become sufficiently ubiquitous that the august Journal of American Folklore took note of them in a long article. Just who the MIB were remained unclear. To saucerians enamored with conspiracy theories, they were enforcers for the Silence Group, associated with international banking interests that sought to stifle the technological advances and moral reforms the Space Brothers wanted to bestow on Earthlings. To others, they were alien beings-perhaps, some speculated, Shaver's deros. In 1962 Bender came down on the side of the alien school. Breaking his nine-year silence in Flying Saucers and the Three Men, which he insisted was not a science-fiction novel, Bender revealed that the men in black who drove him out of ufology were monsters from the planet Kazik. Even Barker, the book's publisher and a relentless Bender promoter, remarked privately and out of customers' hearing, that maybe it had all been a "dream."

After nine years Albert Bender broke his silence and revealed the "truth" in Flying Saucers and the Three Men. According to Bender, the men in black were monsters from the distant plant Kazik.
Fortean Picture Library

­Fear of the MIB was generated in part by worries about the possibly hostile motives of UFOs. A popular early book, Flying Saucers on the Attack by Harold T. Wilkins (1954), fretted th­at a "Cosmic General Staff could even now be plotting a real-life war of the worlds. But next to demonologist-ufologist John A. Keel, author of UFOs: Operation Trojan Horse (1970) and other writings, Wilkins sounded like an optimist. In Keel's rendering UFO intelligences are not simply extraterrestrials but "ultraterrestrials"-entities from unimaginable other dimensions of reality. Worse, they definitely do not like us at all. Human beings, Keel thunders, are "like ants, trying to view reality with very limited perceptive equipment. . . . We are biochemical robots helplessly controlled by forces that can scramble our brains, destroy our memories and use us in any way they see fit. They have been doing it to us forever."­