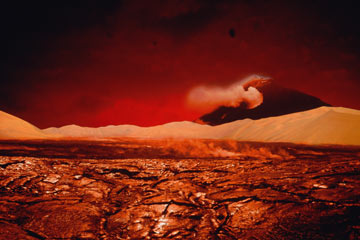 Think of Mars as a massive fixer-upper. Sure, it's nowhere nearly as nice as our current planetary home, but perhaps with a little work we could live there. Given enough time and effort, can we one day terraform the red planet and turn it into a new Earth? Or is Mars nothing but a hopeless money pit in the sky?

As with any prospective homebuyer, we really need to look at what's broken and what it will take to fix everything. Curb appeal aside, two key shortcomings prevent Mars from being move-in ready.

First up, the terrible atmosphere. Humans are pretty picky when it comes to atmospheric conditions. If the pressure's too high or too low, we die. If we don't get enough oxygen, we die. After all, we've evolved to live within a very specific layer of Earth's gaseous outer layer. Mars' atmosphere is very thin and incredibly cold. It lacks sufficient air pressure and contains way too much carbon dioxide.

Second, if you're looking to move into a new planet, make sure there's an intact electromagnetic field. Earth has one, generated by hydrodynamic convection between its liquid outer core and solid inner core. Without this shielding, we'd be exposed to a deadly stream of highly charged particles called the solar wind. For reasons we don't entirely understand yet, Mars lacks this protection and possesses only remnants of a magnetic field at its polar ice caps.

It gets worse. According to a 2010 study from the Swedish Institute of Space Physics and the University of Leicester, double solar radiation waves periodically strip away 30 percent of the sparse Martian atmosphere. These waves occur when one solar wave overtakes another to produce a single, more powerful wave. What little atmosphere remains is due to comet strikes and the occasional melting of polar ice.

So what would it take to fix Mars up to Earthling standards? Scientists have made various proposals to induce a greenhouse effect on Mars through the use of mirrors, atmosphere factories or asteroid impacts. We could melt the polar ice caps to release trapped carbon dioxide or generate greenhouse gases in factories. In time, we could theoretically start using widespread atmosphere factories to turn carbon dioxide into oxygen in a manner similar to plants.

All of this tinkering might thicken up the atmosphere and provide greater radioactive shielding, but Mars will continue to face atmosphere loss due to double solar radiation waves. There's no getting around the fact that Mars desperately lacks an electromagnetic field.

Scientists disagree on the makeup of Mars' modern core. It might be solid, liquid or some combination of the two. It all depends on which scientist you talk to and which study they choose to support. Whatever the truth is, we know something isn't working down there. A 2008 University of Toronto study theorized that, more than 4 billion years ago, incoming asteroids applied a gravitational tug to liquids in Mars' core, producing enough of a dynamo effect to generate a temporary electromagnetic field. Could the introduction of a new, artificial moon give the core the kick-start it needs?

Other proposals involve injecting Mars' core with radioactive waste to fire it up, while other scientists think artificial magnetic fields may be the answer.

Mars is quite the fixer-upper. Even the best-case scenarios entail centuries of renovating, and the technology to induce or recreate electromagnetic field protection may be centuries off as well.

Explore the links on the next page to learn even more about Mars.

Why a Blue Moon's Not Really Blue
Can You Have a Baby on Mars?
Gazing at Celestial History Through the James Webb Space Telescope