Why Are Backhoe Loaders So Popular? 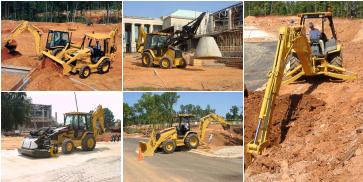 Backhoes have been around more than 40 years, and they've gotten even more popular in the last decade. Caterpillar has sold more than 100,­000 backhoes since 1985. The main reason we see backhoes at work all the time is that digging and moving dirt is a big part of a lot of different projects. For example, you need to dig ditches to lay pipes and underground cable, set up foundations for buildings and create drainage systems. There are a number of tools that do this sort of work, often more efficiently than a backhoe, but many construction crews use a backhoe instead because of a number of factors.

For one thing, backhoes are remarkably compact when compared to large, specialized equipment such as excavators. They can move around all sorts of construction sites and you can take them on the road. Mini-loaders and backhoe units are actually smaller than a typical backhoe loader, but if a contractor needs to dig and load, it's usually better to have both units in one. It saves a lot of time because the operator doesn't have to switch between two different pieces of equipment.

The backhoe is also popular simply because of its amazing capacities. The Caterpillar backhoe loader in the picture above has a huge amount of power. Its backhoe can dig with 15,200 pounds (67.6 kN) of force and can reach more than 25.9 feet (7.9 meters) away. The loader can lift loads up to 8,760 pounds (3,970 kg) and can hold 1.75 cubic yards (1.3 cubic meters) of dirt in its standard bucket. The backhoe and loader components don't have quite as much power as larger equipment, but they do very well, even with fairly difficult jobs.

A construction crew that does all sorts of different work will usually buy a backhoe rather than more efficient specialized equipment because the backhoe performs well in a wide variety of situations. For small to medium digging jobs, a backhoe is certainly sufficient. And as we'll see later on, some backhoe models do a lot more than just digging and loading.