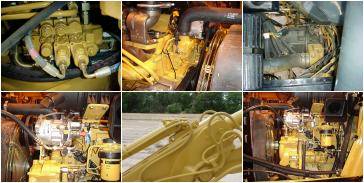 With our very simple hydraulic machine, we pushed down on some oil with one piston and that oil pushed up a larger piston, thereby multiplying the force of our effort. This sort of hydraulic mechanism is great for systems where you need to apply a force very briefly, every once in a while -- a brake system, for example. But in a piece of equipment such as a backhoe, you're always moving pistons, so you need constant oil pressure.

In a backhoe, this pressure comes from an oil pump that is powered by a diesel engine. The pump does the same sort of thing as the narrow piston we saw in the earlier example. It applies a lesser force to the oil at a high rate of speed, generating enough pressure to move another piston more slowly but with greater force. The pump keeps a steady supply of high-pressure oil flowing to a valve block system, which directs the pressure's force (later on, we'll see exactly how this works).

So, the powerful pistons in a backhoe are actually moved by the same forces that we saw working in the simple hydraulic design. There are some significant differences in how the two systems operate, however. The simple piston we looked at could only apply multiplied force in one direction. If you pushed down on the narrower piston, the wider piston moved up with greater force. But for a backhoe to dig, its arms have to be able to move in different directions. To move this way, the pistons must be able to push and pull with full force, which requires a more complex system.

If you were to cut open one of the piston cylinders from a backhoe, you would see something like this:

You can see that the piston rod that extends outside the cylinder is actually moved by a piston head inside the cylinder. There is fluid on both sides of this piston head, fed by two different hoses. If the force is greater on the blue side, the piston will move to the left, and if it is greater on the orange side, the piston will move to the right. So all you have to do to change the direction of force is stop pumping oil to one side and start pumping it to the other. This sort of piston cylinder is commonly called a hydraulic ram.

A backhoe loader uses something called a spool valve to direct oil to either side of a ram. In the animation below, you can see the basic design of this sort of hydraulic system. The spool valve system lets the backhoe move pistons in two directions.

The operator manipulates this valve block with joysticks in the backhoe cab. In some backhoes, control sticks are directly attached to different spool valves, acting as a lever to move the spool directly.

In other backhoes, the joysticks operate hydraulic pistons that control the movement of the spool valves. When you move the joystick in a certain direction, it presses down on a particular piston. This piston pushes oil through a hose to move the spool valve controlling a particular hydraulic ram. By moving different spools, you extend or retract different hydraulic pistons. In the next couple of sections, we'll look at the arrangement of these pistons, and see how their applied forces translate into fluid movement in the backhoe and loader.