Hydraulics in the Backhoe 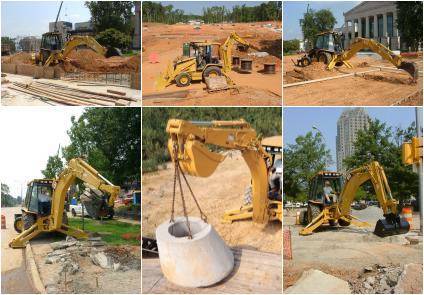 The backhoe has many applications.
Photo courtesy Caterpillar

Now we've seen how the backhoe's valve system can move hydraulic pistons in two directions with great force. But how do equipment designers use this technology to create such powerful digging machines?

Let's go back to the idea of a backhoe being a huge, powerful version of a human arm. We compared the steel segments -- the boom, the stick and the bucket -- to three pieces of your arm, similarly connected by three joints. It's obvious that your arm wouldn't be quite as useful without muscles -- your muscles provide the force that actually pulls the various segments of your arm toward and away from each other. The cylinders in a backhoe serve the same function. All of the segments are hinged together and each cylinder can either pull a connected segment closer or push it away.

Each cylinder piston is controlled by its own spool valve. When you dig with a backhoe, you're actually controlling at least four individual spools (which move four different pistons). In the animation below, you can see how an operator activates some of these different pistons together to dig with the backhoe.

The backhoe also has two hydraulic pistons near the base of the boom arm. The boom arm is connected to the tractor with a swing casting so that these pistons can swing the backhoe arm from side to side. They are synchronized so that when you push with one, the other pulls. In many European backhoes, the boom is attached to a side-shift mechanism, a bracket that can move the entire backhoe arm horizontally on the tractor. This lets the operator dig in spaces where it would be very difficult to maneuver the entire tractor into a good working position.

One of the most significant variables in backhoe performance is dig depth. This is simply a rating of how deep the backhoe arm can dig. Typically, dig depth is somewhere between 12 and 16 feet (3 to 5 m). Many backhoes have an extendible stick that lets them increase this dig depth a few feet when needed. Most backhoe jobs don't require operators to dig ditches and holes more than 10-feet deep, but the dig depth is still a useful measure because it also indicates how far out the backhoe can reach.

Another important rating is horsepower. If you've read How Horsepower Works, then you know that horsepower is a measure of how much work something can do in a certain amount of time. A backhoe horsepower rating tells you how much power the engine provides for all of the systems in the backhoe, which gives you an idea of what the backhoe is capable of.

Backhoe models with greater dig depth usually have more horsepower. Increasing both of these factors expands the backhoe's abilities. Backhoes designed for residential construction applications -- such as digging foundations, grading, and digging ditches for sewer and utility lines -- generally have a 14- to 16-foot dig depth and 70 to 85 horsepower. Backhoes designed for heavier industrial and commercial applications -- such as road and bridge maintenance or large-scale construction -- have a dig depth greater than 17 feet (5 m) and at least 100 horsepower.

Backhoes also have breakout force ratings. Breakout force describes the maximum force that the arm can apply on a load. It's measured by how hard the end of the bucket can push, but all of the hydraulic rams on the arm contribute to the total force. Backhoes also have stick lift and boom lift ratings, which tell you the maximum weight the stick and the boom can lift individually when the hydraulic rams are pushing with full force. This is another measure of a backhoe's general capacity, and is especially useful for contractors who plan to use the backhoe as a sort of crane for lifting heavy loads. The backhoe in the pictures above has a 14,712-lb (65.4-kN) breakout force, a 6,250-lb (2,830-kg) stick lift capacity and a 3,940-lb (1,787-kg) boom lift capacity.