Hydraulics in the Loader 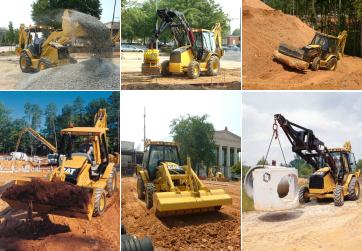 The loader can do all sorts of jobs. (Click on each picture for a larger image.)
Photo courtesy Caterpillar

We've mostly focused on the backhoe here, but the loader is also driven by hydraulics. Its hydraulic rams are configured in a slightly different way -- they work as pairs. The rams lift the bucket in exactly the same way you would lift a heavy box -- you grab both sides and lift with both arms. The valve system pumps the same amount of oil to each ram in the pair so that they move in unison. This stabilizes the loader bucket.

Caterpillar has two types of loaders on its backhoes -- a single tilt (yellow) and a parallel lift (black). Both types use a piston pair to lift the loader arms. This piston pair is attached to the tractor and the arms holding the bucket. The pistons extend to raise the arms and retract to lower them. Parallel-lift loaders use a second pair of rams attached to the loader arms and the bucket itself. These rams extend to dump the bucket and retract to tilt it back up. Single-tilt loaders do this with only one central ram.

Parallel-lift loaders have an eight-bar-linkage design that improves loading performance. In this system, different sets of bars in the loader are connected in such a way that the bucket doesn't tip as it rises. Basically, the two main sets of parallel bars that hold the bucket move together so that they keep the bucket level with the ground. Without parallel lift, the loader would be something like a seesaw with a crate nailed to one end. If you filled the crate with oranges when the see-saw was level, a lot of them would fall out when you tilted the seesaw up. A parallel-lift system allows for more efficient loading because it keeps more of the material in the bucket as it lifts.

Another cool function in some backhoe loaders is a technology called ride control. Carrying a full load with a backhoe loader makes for a fairly bumpy ride because the wheel base is so small compared to the total inertia of the equipment and the load -- the weight on one end rocks the whole structure back and forth. To make the ride a bit smoother, backhoes with ride control use the loader lift hydraulics as a shock-absorber system. Basically, as the bucket bounces, it pushes down on the oil in the hydraulic cylinders. The oil flows to another piston cylinder, the accumulator, which has compressed nitrogen gas on the other side. Unlike oil, this nitrogen gas can be compressed, so it acts like a spring -- when the incompressible oil from the loader rams pushes down on one side of the piston, the gas compresses a little before pushing back up on the piston.

Click here to see a demonstration of how ride control works.

With just this mechanism, the oil would simply be pushed back and forth, so the bucket would keep bouncing. To create a smooth ride, the ride control system has to absorb some of that energy as the oil flows. The damping mechanism that accomplishes this is a small orifice in the hose carrying the oil from the lift ram to the ride control accumulator. With each bounce of the loader bucket, oil is squeezed through this small opening. The energy expended to force the oil through the opening is converted into heat. This energy loss essentially absorbs the bouncing energy, making for a smoother ride.

Like backhoe arms, loaders are rated by their breakout force. This rating tells you the maximum force the loader's hydraulic rams can apply to the front bucket, which gives you an idea of how well a loader will be able to push and lift a load.