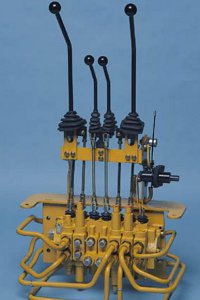 When you stop and think about all the different moving parts in a backhoe loader, it seems unbelievable that you need only one person at the controls. As we saw in the last two sections, the backhoe arm swivels on four different hinges (some bucket designs have five) and the loader moves on two to three hinges. Additionally, the operator controls the stabilizer arms and moves the tractor around while loading. How does one person do all of this?

The main controls for a Caterpillar backhoe are two computer-style joysticks. Here are the functions of the joysticks:

Digging effectively with a backhoe requires practice, like learning to drive a car. The hardest part of learning to drive is usually paying attention to all of the different things going on. It takes a lot of practice to keep all of the various controls in your mind at once. Learning how to operate a backhoe is the same way. Picking up something with your arm is incredibly easy because you move every muscle automatically. But imagine how hard it would be if you had to stop and think about every muscle you were moving in that one simple motion.

An experienced driver doesn't even think about most of the things he or she is doing while driving. Backhoe operators reach this same level. With enough practice, the controls become second nature. But in addition to learning the controls, the operator must also learn to position the arm so that it will dig efficiently. That means knowing the best angle for the bucket as it sinks into the dirt, knowing when to move the boom and when to move the stick and getting a sense of what arm positions provide the best leverage.

So the loader is pretty easy to learn compared to the backhoe. To get much use out of it, however, you have to be able to operate it while moving the tractor around the site. The tractor basically handles like a car, with a steering wheel, accelerator, brake pedal and gear shift. The loader and the tractor are powered by the same engine, which has a variable speed control. For an extra boost in loader force, the operator can put the tractor in neutral so that most of the engine's power goes directly to the hydraulic system.

Experienced backhoe operators use the backhoe loader in much the same way you would use a shovel or wheelbarrow at home -- they know exactly how to move the controls to dig and load quickly and effectively. And they're always thinking ahead to their next few moves, planning their strategy. This is also something like driving a car: When you see a traffic jam ahead of you on the road, you're already deciding how you're going to navigate it. Just as with driving, learning how to operate the backhoe is only the first step -- the real skill is in knowing how to use the backhoe to accomplish different tasks.

Click here to see a 360-degree view of the operator's view from the cab.