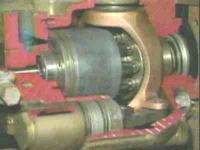 Click here to watch a video demonstrating how the hydraulic pump works.

All of the hydraulic systems on a backhoe get their hydraulic pressure from a hydraulic pump. There are two types of pumps in common use:

In a gear pump, a pair of inter-meshing gears pressurizes the hydraulic oil. The disadvantage of gear pumps is that pressure rises and falls with engine speed, and the only way to get high pressure is to run the engine at full power.

A variable-displacement pump is more sophisticated. It has a series of piston cylinders fixed in a ring inside a barrel. The engine spins the barrel around so that the cylinders revolve. The cylinder pistons extend out the back of the barrel, where they are attached to an angled swash plate. As the barrel spins around, the angle of the swash plate pushes the pistons in and then pulls them out. You can see in the diagram that as the swash plate pulls the piston out, the cylinder sucks in oil from the tank. As the plate pushes the piston in, the cylinder pumps oil out into the hydraulic system. Just before a cylinder rotates from the intake side to the discharge side, it's holding the maximum amount of oil. As it rotates from the hydraulic-system side to the intake side, it's holding the minimum amount of oil. This pressurizes the oil so that it is pumped out with great force.

The heart of the load-sensing hydraulic system is the variable-displacement pump.

This pump is especially cool because you can very easily adjust how much oil it pumps. All you have to do is change the angle of the swash plate. When the swash plate is pressed closer to the barrel, there isn't as great a difference between the size of a cylinder's fluid compartment on the left side and the size of the compartment on the right side. Consequently, the pump doesn't pump as much oil. When the swash plate is pressed all the way up against the barrel -- so that it isn't at an angle at all -- the system doesn't pump any oil.

The angle of the swash plate is determined by the needs of the hydraulic system. Special circuits monitor the pressure on the various hydraulic rams and adjust the flow rate to the necessary level. This load-sensing hydraulic system has a couple of significant advantages over a system using a fixed-displacement pump.

First of all, the variable-displacement pump is more efficient because it only pumps the amount of oil that the hydraulic system needs. When none of the hydraulic rams are operating, the pump simply stops pumping oil. This reduces the fuel consumption of the backhoe a good deal.

If the pump tries to draw more power than the engine can produce (at a particular speed), the engine will stall. So, to provide maximum pressure to the hydraulics at all times, the system has to make intelligent use of the available power.

In a backhoe, power is just flow rate multiplied by hydraulic pressure. The pressure is determined by the operation being performed -- lifting heavy objects or busting through hard ground requires higher pressure than does moving an empty bucket. Relief valves determine the maximum pressure in the hydraulic system.

The hydraulic pump from a Caterpillar backhoe
Photo courtesy Caterpillar

On backhoes with fixed-displacement pumps, the flow rate is constant at any particular engine speed. Since the flow rate multiplied by the maximum pressure can't exceed the available engine power, the system always pumps the amount of oil needed for maximum pressure. Some oil is used by the hydraulics and the rest goes to the tank. This means that if you are not demanding full pressure, you're wasting available engine power and wearing out the system for no reason.

Backhoes with variable-displacement pumps don't have this problem. The system monitors the pressure of all the hydraulic rams and controls the angle of the swash plate to meet the demands of the ram that has the highest pressure level. If you are not demanding full pressure, the pump will increase its displacement (which increases flow rate), making the tools move faster. When the system demands full pressure, the pump will decrease its displacement so that it can provide the pressure without exceeding the engine's available power.