Browse the article How Gears Work

­Gears are used in tons of mechanical devices. They do several important jobs, but most important, they provide a gear reduction in motorized equipment. This is key because, often, a small motor spinning very fast can provide enough power for a device, but not enough torque. For instance, an electric screwdriver has a very large gear reduction because it needs lots of torque to turn screws, bu­t the motor only produces a small amount of torque at a high speed. With a gear reduction, the output speed can be reduced while the torque is increased.

­Another thing gears do is adjust the direction of rotation. For instance, in the differential between the rear wheels of your car, the power is transmitted by a shaft that runs down the center of the car, and the differential has to turn that power 90 degrees to apply it to the wheels.

On any gear, the ratio is determined by the distances from the center of the gear to the point of contact. For instance, in a device with two gears, if one gear is twice the diameter of the other, the ratio would be 2:1.

One of the most primitive types of gears we could look at would be a wheel with wooden pegs sticking out of it.

The problem with this type of gear is that the distance from the center of each gear to the point of contact changes as the gears rotate. This means that the gear ratio changes as the gear turns, meaning that the output speed also changes. If you used a gear like this in your car, it would be impossible to maintain a constant speed -- you would be accelerating and decelerating constantly.

Many modern gears use a special tooth profile called an involute. This profile has the very important property of maintaining a constant speed ratio between the two gears. Like the peg wheel above, the contact point moves; but the shape of the involute gear tooth compensates for this movement. See this section for details.

Now let's take a look at some of the different types of gears. 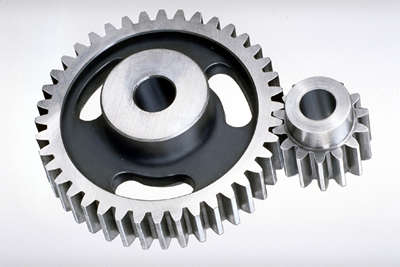 Spur gears are the most common type of gears. They have straight teeth, and are mounted on parallel shafts. Sometimes, many spur gears are used at once to create very large gear reductions.

Spur gears are used in many devices that you can see all over HowStuffWorks, like the electric screwdriver, dancing monster, oscillating sprinkler, windup alarm clock, washing machine and clothes dryer. But you won't find many in your car.

This is because the spur gear can be really loud. Each time a gear tooth engages a tooth on the other gear, the teeth collide, and this impact makes a noise. It also increases the stress on the gear teeth.

To reduce the noise and stress in the gears, most of the gears in your car are helical. 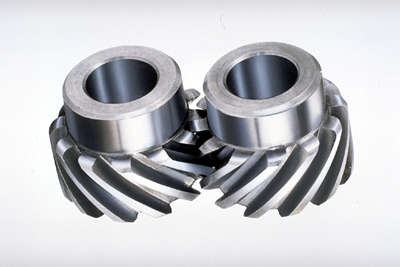 The teeth on helical gears are cut at an angle to the face of the gear. When two teeth on a helical gear system engage, the contact starts at one end of the tooth and gradually spreads as the gears rotate, until the two teeth are in full engagement.

This gradual engagement makes helical gears operate much more smoothly and quietly than spur gears. For this reason, helical gears are used in almost all car transmissions.

Because of the angle of the teeth on helical gears, they create a thrust load on the gear when they mesh. Devices that use helical gears have bearings that can support this thrust load.

One interesting thing about helical gears is that if the angles of the gear teeth are correct, they can be mounted on perpendicular shafts, adjusting the rotation angle by 90 degrees.

Bevel gears are useful when the direction of a shaft's rotation needs to be changed. They are usually mounted on shafts that are 90 degrees apart, but can be designed to work at other angles as well.

The teeth on bevel gears can be straight, spiral or hypoid. Straight bevel gear teeth actually have the same problem as straight spur gear teeth -- as each tooth engages, it impacts the corresponding tooth all at once.

Just like with spur gears, the solution to this problem is to curve the gear teeth. These spiral teeth engage just like helical teeth: the contact starts at one end of the gear and progressively spreads across the whole tooth.

On straight and spiral bevel gears, the shafts must be perpendicular to each other, but they must also be in the same plane. If you were to extend the two shafts past the gears, they would intersect. The hypoid gear, on the other hand, can engage with the axes in different planes. 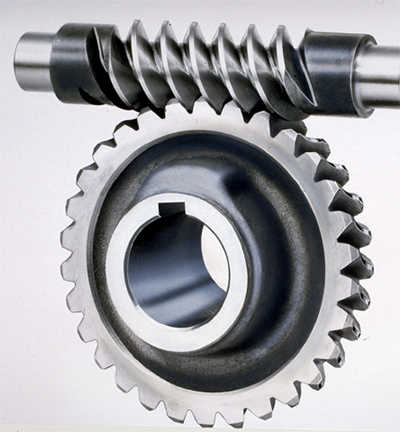 Worm gears are used when large gear reductions are needed. It is common for worm gears to have reductions of 20:1, and even up to 300:1 or greater.

Many worm gears have an interesting property that no other gear set has: the worm can easily turn the gear, but the gear cannot turn the worm. This is because the angle on the worm is so shallow that when the gear tries to spin it, the friction between the gear and the worm holds the worm in place.

This feature is useful for machines such as conveyor systems, in which the locking feature can act as a brake for the conveyor when the motor is not turning. One other very interesting usage of worm gears is in the Torsen differential, which is used on some high-performance cars and trucks. 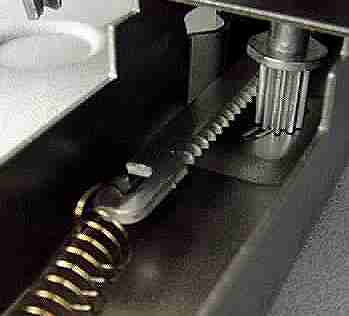 Figure 9. Rack and pinion gears from a household scale

Rack and pinion gears are used to convert rotation into linear motion. A perfect example of this is the steering system on many cars. The steering wheel rotates a gear which engages the rack. As the gear turns, it slides the rack either to the right or left, depending on which way you turn the wheel.

Rack and pinion gears are also used in some scales to turn the dial that displays your weight.

Each of these three components can be the input, the output or can be held stationary. Choosing which piece plays which role determines the gear ratio for the gearset. Let's take a look at a single planetary gearset.

One of the planetary gearsets from our transmission has a ring gear with 72 teeth and a sun gear with 30 teeth. We can get lots of different gear ratios out of this gearset.

Also, locking any two of the three components together will lock up the whole device at a 1:1 gear reduction. Notice that the first gear ratio listed above is a reduction -- the output speed is slower than the input speed. The second is an overdrive -- the output speed is faster than the input speed. The last is a reduction again, but the output direction is reversed. There are several other ratios that can be gotten out of this planetary gear set, but these are the ones that are relevant to our automatic transmission. You can try these out in the animation below:


Animation of the different gear ratios related to automatic transmissions. Click on the buttons on the left in the table above.

So this one set of gears can produce all of these different gear ratios without having to engage or disengage any other gears. With two of these gearsets in a row, we can get the four forward gears and one reverse gear our transmission needs. We'll put the two sets of gears together in the next section.