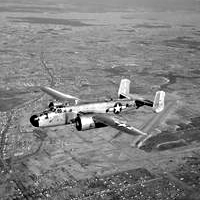 In this article, you will learn how the radial engine works, what makes it different from other engine configurations and why it fits in so well with airplanes. 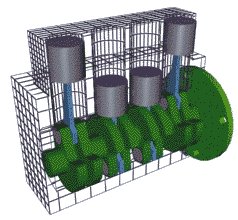 (Click on image to see animation) Inline - The cylinders are arranged in a line in a single bank.

If you have read How Car Engines Work, then you are familiar with the concept behind the four-stroke engine. Car engines arrange pistons in three typical patterns, as shown here:

Each different configuration has different smoothness, manufacturing cost and shape characteristics that make it more suitable for certain vehicles.

A radial engine is yet another configuration for the pistons, as we will see in the next section.

Inside a Radial Engine

The radial engine idea is very simple -- it takes the pistons and arranges them in a circle around the crankshaft, as shown here:

You can see in the illustration that this is a five-cylinder engine -- radial engines typically have anywhere from three to nine cylinders. The radial engine has the same sort of pistons, valves and spark plugs that any four-stroke engine has. The big difference is in the crankshaft.

Instead of the long shaft that's used in a multi-cylinder car engine, there is a single hub -- all of the piston's connecting rods connect to this hub. One rod is fixed, and it is generally known as the master rod. The others are called articulating rods. They mount on pins that allow them to rotate as the crankshaft and the pistons move. 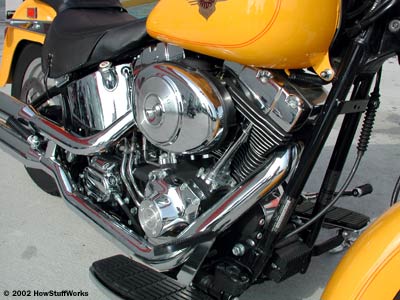 Radial engines reached their zenith during WWII. There are some radial engines around today, but they are not that common. Most propeller-driven planes today use more traditional engine configurations (like a flat four-cylinder) or modern gas turbine engines. Gas turbines are much lighter than radial engines for the power they produce.

One place where you can still see the influence of the radial engine concept is in the two-cylinder engine of a Harley Davidson motorcycle.

The engine from a Harley can be thought of as two cylinders from a radial engine.

It can be thought of, in a way, as two pistons from a radial engine. In a Harley, both pistons share a single connection point to the crankshaft, like in a radial engine.

For more information on radial engines and related topics, check out the links on the next page.