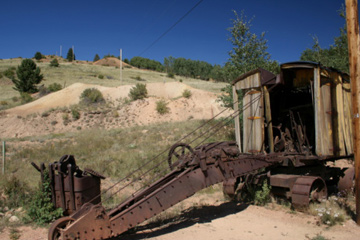 William Otis received a U.S. patent for the steam shovel -- the first of its kind -- in 1839.
Hemera/Thinkstock

By the 1800s, inventors were taking advantage of steam energy to power all types of mechanical devices. One such brilliant inventor was William Otis, who designed a machine to dig faster and more efficiently than the teams of men employed for railroad-building projects. While only in his 20s Otis (a cousin of the elevator entrepreneur Elisha Otis) received a U.S. patent for the steam shovel -- the first of its kind -- in 1839.

He died that same year of typhoid fever, at age 26. It would be several decades before steam shovels could make a significant mark on the landscape though, as the Otis family tightly controlled the patent behind the technology.

But eventually, other inventors and companies sprang up with their own steam shovel designs to feed the exploding demand to move earth faster -- a demand created by railroad expansion in the United States and elsewhere.

The first "full-swing" steam shovel -- one in which the bucket and arm could swing a full 360 degrees, was invented in England in 1884 and brought new versatility and value to the machines. This advance was followed by others, including wheels that didn't have to be mounted on rail tracks to move the equipment; steel cable that was more durable than the chains used to operate the hoisting mechanisms; and increasingly larger shovel sizes that could perform bigger jobs.

The Marion Steam Shovel Company, founded in 1884, in Marion, Ohio, sprang up in direct response to the railroad boom that opened up the western United States and Canada. By the early 1900s, Marion was such a dominant steam shovel manufacturer that the town came to be known as "the city that built the Panama Canal," for the crucial role steam shovels played in that massive undertaking [source: Ohio History Central].

Another power player in the steam shovel business, Bucyrus Foundry and Manufacturing Company (established in 1880), committed itself to excavating machinery in 1896 as it became obvious what profit potential lie in steam shovels and other heavy digging equipment. Bucyrus, too, could lay claim to pitching in on some of the most ambitious engineering projects of the time -- including the Panama Canal. According to the company history, 77 Bucyrus shovels were used for the historic dig connecting the Atlantic and Pacific oceans [source: Bucyrus International].

Company lore even has it that President Theodore Roosevelt climbed aboard a 95-ton Bucyrus steam shovel while inspecting progress on the Panama canal in 1908.

Bucyrus, in one of the most common ironies of business, wound up buying one of its biggest longtime rivals, Marion (by then named the Marion Power Shovel Company), in 1997.

Are you ready to dig beneath the surface and find out how these mammoth machines operate?