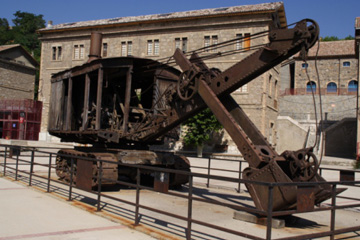 Steam shovels could move from one location to another -- but it often took a long time to get there.
©iStockphoto/Thinkstock

So how exactly do these boiling behemoths work? As you might guess, the driving force behind them is their clever use of steam, starting with the boiler and gigantic water tank.

Usually a second person, often called a fireman, would have the express job of tending to the boiler: stoking the flames with coal and maintaining pressure at just the right amount to provide steam needed to power movement and operation of the shovel.

From the boiler, steam traveled down a pipe to one or more cylinders. In the cylinders, the high-pressure steam drove pistons, which in turn supplied mechanical power for the steam shovel's subsystems, including a main engine, winch and "crowd engine."

Closer to the "business end" of the shovel sat the boom, dipper stick and bucket -- the mouth-like container that digs into material then releases it into an awaiting truck or other transport to haul the stuff away.

All this sat on a chassis that allowed the steam shovel to move from one location to another -- slowly. The first steam shovels were quite crude in this regard, running on metal tracks that workers had to scramble around and place in front of the vehicle when it was needed in a new location. Eventually the shovels would come to get wheels and later, caterpillar tracks that allowed them to move more independently [source: Haddock].

These hard-working machines helped build a world obsessed with economic growth, but after decades of popularity, they fell out of favor. Find out why on the next page.