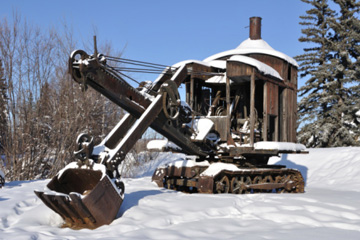 Rusting away -- an old mining steam shovel in Alaska
©iStockphoto/Thinkstock

So what happened to these once-dominant construction site fixtures? Did the industrialized countries of the world lose their appetite for large-scale projects?

Hardly. Steam shovels simply made way for more modern technologies. Diesel engines began to replace steam engines on a large scale in the 1930s. Also, the advent of hydraulic mechanical systems proved more reliable and efficient than the chains, cables and pulleys used for steam-powered machines.

The steam shovel didn't disappear from the landscape entirely. Because of their massive size, completely dismantling them wasn't easy. Many were abandoned after their work was done and can still be found at old quarries or mining sites, rusting away. Some were rescued and restored and survive as tourist attractions or museum pieces. Yet others have found their way into the hands of collectors who maintain them in working condition and show them off at events sponsored by the Historical Construction Equipment Association.

You can even find steam shovel scale models -- some of which actually work -- that celebrate the ingenuity that went into engineering the originals.

Steam shovels served as the predecessors to excavation machines that are still common today, from the tracked, drivable excavators seen at building sites to the towering, lumbering drag line excavators used for mining operations.

To unearth lots more information about steam shovels, follow the links below.